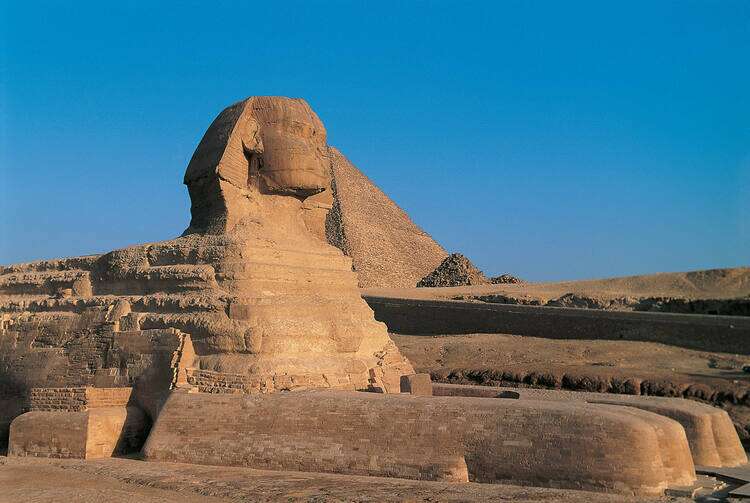 What comes to mind when you think of Egypt? Is it the fact that it houses the only remaining ancient wonder of the world– the Great Pyramids of Giza? Or is it the hieroglyphic writings and Egyptian mummies? Whichever the case, it is worthy to say that Egypt has a rich cultural heritage.

Did you know that ancient Egyptians had more than 2000 Deities? I bet you didn’t! They had a god for everything. They worshiped these gods so that life could be kept in balance.

If you enjoy playing board games, you’ll be impressed to learn that the ancient Egyptians did so, too. A popular board game known as Senet used the same tricks, as those of playing Dice.

Love wearing makeup? Well, gang, so did the Egyptian men and women. They believed their makeup had healing powers.

Quiz yourself with this list of Egypt trivia questions and answers and see how well you are versed with the country.

1. What does the word hieroglyphs mean?

2. What do Egyptians call Egypt?

3. Who was buried in an underground tomb?

4. Ancient Egypt was responsible for the earliest known peace treaty which was between Egypt and what group of people?

5. When did Egypt attain independence, and from whom?

6. What are the Hieroglyphs?

Picture symbols that the Egyptians used in writings

7. What was the first pyramid to be built called?

The Pyramid of Djoser

8. According to the census of 2006, what was the population of Egypt?

9. How many mummies did archeologists find inside the Great Pyramid of Giza?

10. What is the oldest known monumental sculpture in Egypt?

11. What is the currency of Egypt?

12. Why did Egyptians make mummies?

To preserve dead bodies so that they would experience afterlife

13. What is the name of the funerary figurine placed in tombs to serve as servants for the deceased in the afterlife?

14. The longest river in Africa flows through Egypt. What is it called?

15. What was kept in Canopic jars?

16. The Great Pyramids of Giza consist of how many pyramids?

17. Much of Egypt is desert, but which desert is it?

18. Which ancient Egyptian dynasty was Ramses III the pharaoh of?

19. Which pharaoh was the father of Ramses III?

20. Who designed the Suez Canal?

21. True or false? The Egyptians made boats out of reeds?

22. Which pharaoh was the first historically confirmed female pharaoh?

24. True or false: The Egyptians tried to stop the Nile River from flooding?

25. Which female pharaoh had the longest reign?

26. After which famous military leader was Alexandria named?

27. The month of August is the eighth month of the year due to which pharaoh?

29. What would you find inside an Egyptian mummy?

30. Which pharaoh has the most surviving statues?

31. Umm Kulthum was a famous Egyptian?

32. What was the role of the jackal god called anubis?

33. Which pharaoh covered slaves in honey to attract flies away from him?

34. What is the name of the famous Egyptian actor who starred in ‘Doctor Zhivago’ and ‘Lawrence of Arabia’?

35. Which god liked to drink blood?

36. The first known labor strike in recorded history occurred under which pharaoh?

37. What is the name of the dam that was built, thereby creating Lake Nasser?

38. What does the name Cairo mean?

The capital of Egypt – Cairo’s official name is al-Qāhirah (in Arabic), which means the strong or the victorious.

39. How many years did King Tut rule?

40. Which sea is the popular holiday resort of Sharm El Sheikh located on?

41. We all know the iconic picture of the three pyramids of Giza, but what are they called?

42. How old was King Tut when he became pharaoh?

43. What did the ancient Egyptians call the star grouping we call the Big Dipper?

45. Where did ancient Egyptian women place or wear perfume?

In wax cones on their heads

46. Ancient Egyptians had cures for many ailments. For toothache they would put a dead what on the bad tooth?

47. How many children did King Tut have?

48. Used to make bread and beer, what was the major crop of ancient Egypt?

49. Which James Bond film has scenes filmed at the Giza pyramids and at Karnak Temple in Luxor?

The spy who loved me

50. What does Tutankhamun mean?

51. When the ancient Egyptians held a party, what did they call it?

A house of beer

52. During his lifetime King Tut contracted multiple infections of what disease?

53. What breed of dog was used as a hunting dog in ancient Egypt?

54. The tomb of Tutankhamun was discovered in November 1922 by Howard Carter. Who sponsored the dig?

56. How many times was King Tut’s tomb robbed?

57. Name the only wind instrument in ancient Egypt?

58. Ancient Egyptians believed the god Anubis weighed what in the human body to see if the person would be allowed into the afterlife?

59. How many items were found in King Tut’s tomb?

60. Who was the longest reigning Pharaoh?

61. How many sarcophagi was King Tut buried in?

62. The Christian cross was developed from what ancient Egyptian symbol?

63. The ancient Egyptians needed to try and predict when the Nile would flood each year and this led to the development of the first what?

64. Who was the first person to die from King Tut’s curse?

65. What was the most popular pet in ancient Egypt?

66. The Nile is the world’s longest river – to the nearest kilometre how long is it?

67. What 1994 sci-fi film is based on ancient Egyptian mythology and centers around an Egyptian structure in Giza that is covered in hieroglyphs?

69. Where was Ancient Egypt located?

70. What was the Egyptian’s favourite animal?

71. Who is the ruler of the underworld?

72. The paper-like material made from reeds is called?

73. Around how many years did the civilization of Ancient Egypt last?

74. How high was the Big Pyramid (Kheops king’s tomb)?

75. Which was the first female pharaoh and ruled for 20 years?

76. What are the three major kingdoms that make up the history of Ancient Egypt?

The Old, Middle, and New Kingdoms

77. What was the most important livestock for Ancient Egyptians?

79. he God Osiris, king of the dead and symbol of immortality, was shown with?

80. What was the main purpose of the Egyptian pyramids?

Burials sites for the Pharaohs

82. During the mummification process, the body was soaked in what in order to dry the body?

83. What major part of the Ancient Egyptian culture played a significant role in the government?

84. What was the particularity of the pharaoh Tutankhamen?

He came to the throne at the age of 8

85. According to Egyptian people, which plant had the power to chase snakes away?

86. What color were the Pyramids at Giza originally?

87. What did ancient Egyptians call their land?

88. What invention of the Egyptians was important in enabling them to run a complex government?

89. What spurred the rise of modern Egyptology?

The discovery of Rosetta stone

92. Who was the King of Egypt when monarchy was overthrown in 1952?

93. When was Suez Canal nationalised?

94. Who succeeded Gamal Abdel Nasser as President of Egypt?

95.  What is the designation of the Head of the Coptic Orthodox Church?

96. What percentage of Egyptians participated in the 2005 presidential election?

98. What distinction does the Nile River hold?

It is the longest river in the world

99. Alexandria was the site of which of the seven ancient wonders?