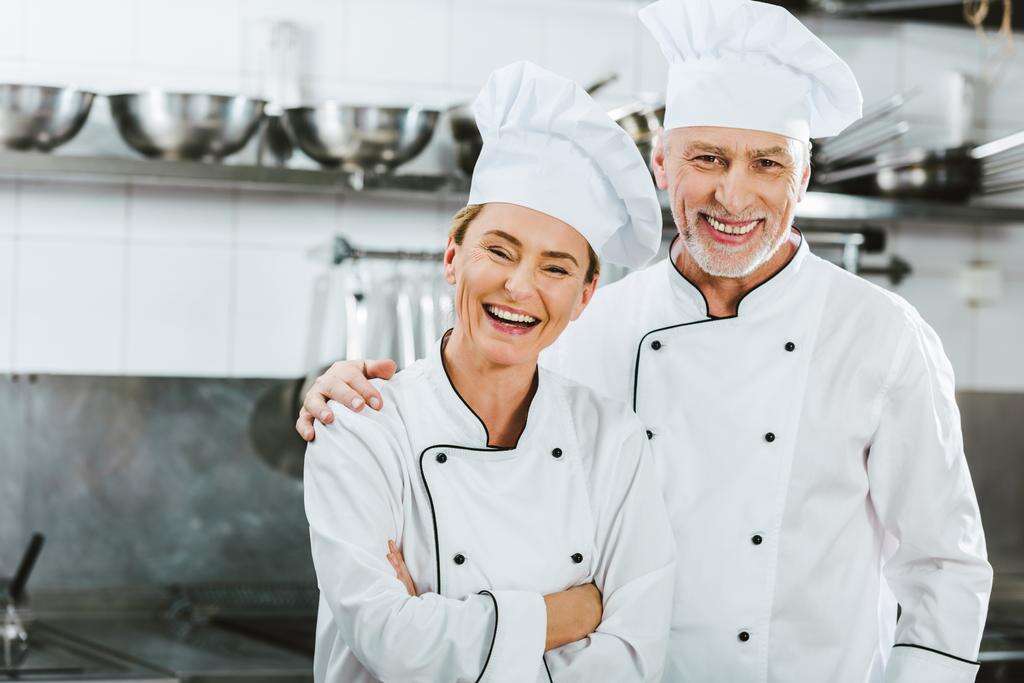 Here you will find a great collection of tasty, funny chef jokes and puns for food lovers and chefs alike.

Cooking is an art. Not all of us like being in the kitchen but we sure love a well-prepared meal. That’s why in the hospitality industry you’ll find top chefs ready to cook up a storm. Of course at your service!

The cooking process requires keenness and should be fun. Bringing up culinary humor does not just make you giggle, but also lightens up the mood in a hectic kitchen.

Funny jokes about cooking are a lot more than just the one-liners. Take a dive into our buffet of signature chef jokes and puns to get a slice of sizzling humor!

These chefs’ wok puns are smart and hilariously funny to tell and keep you in a great cooking mood.

1. At what age did the world’s greatest sushi chef begin his training?

The Lunchback of Notre Dame.

3. Why did the short chef quit his job at the casino?

He said the steaks were too high.

5. Did that taco chef act rudely toward me?

Yeah, he was jalapeño business.

6. How can you tell from the food that the chef was upset?

It tastes of odd angry-dients.

7. Did you hear about the French chef who committed suicide?

8. Did you ever hear about the mute Thai chef?

He could wok the wok but not talk the talk.

9. Did you hear about the Italian chef who died recently?

10. Did you hear about the Boston chef who died?

They could not find the sauce of his illness

11. Did you hear about the chef who spilled his herbs on the floor?

Cleaning it up was a massive waste of thyme.

12. What happened to the Asian chef who dropped a dumpling on the floor?

He was sentenced for wonton endangerment.

13. I used to be one of those chefs who shouts and swears a lot.

But then I discovered oven mitts.

14. Did you hear about the guy who took a second job as a pizza chef?

He kneaded the dough

15. What did the chef say when his dish utterly satisfied the oppressive ruler?

16. Did you hear about the Indian chef that fell down the stairs?

He was curryed away to the hospital.

17. What did the chef say when she ran out of seafood?

19. How did the pasta chef get locked out of his house?

He came home from work with gnocchi.

20. What did the chef say when he cooked up moose meat instead of beef?

21. How do taco chefs live their lives?

By seasoning the moment!

23. How did the angry chef get to his junior?

He shouted, “I better give you a pizza my mind!”

24. What did the chef say when asked how he commutes to work?

He said he woks.

25. My Grandad, who died in the war, could only be a chef due to his dyslexia.

He went out all buns glazing.

When the food tastes funny.

27. What is a chef’s favorite music to play in the kitchen?

28. Why did the French chef use only one egg when he made his omelet?

Because one egg is un oeuf.

29. How do you know the Japanese mass murderer was a chef?

He spent his day cutting up vegetables

30. Did you hear about the Italian chef who joined the army?

He wanted a pizza the action.

31. How do you say goodbye to an Italian chef?

32. What happens when there’s a fight in the kitchen?

The fish get battered.

33. How many chefs does it take to change a light bulb?

One to do it, and five others to tell him how they did it differently in their last kitchen.

34. Why does Bryan Adams keep a CD in the kitchen?

35. What do you call a lawyer when he’s cooking dinner?

36. What will you be if you run into the kitchen and step on the Cheerios?

37. What do you call the salad of an epileptic chef?

38. How many chefs does it take to stuff a turkey?

One, but you really have to cram him in there.

39. Why did Judas go shopping for kitchen utensils?

Because he chose to be-tray.

40. What did the boiling water say to the chef?

When I am gone, I will be mist.

41. How many pastry chefs does it take to make a pie?

42. What does an Italian chef cook in a Chinese restaurant?

43. What are chefs always trying to win?

44. I was hired as a chef at an Indian restaurant.

Before they’d tell me their secret recipes, I had to sign a Naan-Disclosure Agreement.

46. Why did the Italian sushi chef refuse to serve the musician?

Because he was outta tuna.

47. What did the chef do with his laddle after he got his first paycheck?

He souped it up.

48. Why shouldn’t you lend your car to an Italian chef?

50. What did the French chef give his wife for Valentine’s Day?

A hug and a quiche!

52. Who was the Pharaoh’s favorite chef?

53. What did the french chef say when the cheese factory exploded?

Looks like we have debris all over the place!

54. What do you call a very young Italian chef?

55. Did you hear about the Italian chef’s demise?

He was loved so much, his legacy will become a pizza history.

56. Did you hear about the Italian pastry chef who got fired?

As he left he said, “I cannoli do so much to please you.”

57. What did the Native Americans do after culinary school?

He became a Souix chef.

58. What did the fries, gravy, and cheese say to the chef?

Why are you poutine us together?

60. What do you call a dinosaur that loves vegetables?

61. Which vegetable is the strongest of all?

62. Why did the French chef quit working at the haunted restaurant?

63. What’s so great about the carrot detective?

He gets to the root of every case.

64. Why did the dwarf chef leave the restaurant?

Because the steaks were too high.

66. What’s worse than finding hair in your food?

Finding out the chef is bald.

67. Which vegetable can fix a spare tire?

68. Just been sacked from my job as a chef for stealing,

I’ve always been a whisk taker.

69. How do you serve juice to a scarecrow?

70. Where does the midget pizza chef with epilepsy work?

71. What do you call a movie that’s about leafy greens?

72. What do you call a mentally retarded chef?

They make it to the honor roll.

74. Why did the french chef go to the police?

75. Why did the grocery stores run out of pasta during the pandemic?

Because of a fusilli people.

76. Why wouldn’t it hurt if a can of coke fell on your head at a supermarket?

Because it’s a soft drink.

77. How do you know the Japanese mass murderer was a chef?

He spent his day cutting up vegetables

78. What do you call a grocery store cashier who tricks with the barcode machine?

79. A man in a restaurant asks the waiter, “How does the chef prepare the chicken?”

The waiter replies, “He looks it straight in the eye and says, ‘You’re gonna die.'”

80. What did the chef say when you told him you watched a children’s movie about a pastry chef?

I love James and the Giant Quiche!

81. A chef, a clockmaker, and a thief walk into a bar, but the bartender says he doesn’t get the joke.

They all say, “It’s okay, these things take thyme.”

82. What is the most common reason behind a pastry chef getting arrested?

84. Which TV series would a pastry chef love to watch?

Game of Scones: All men must dine.

He said yeah but it’s rare.

86. A Blonde went for a pizza. The chef said would you like it cut into 4 slices or 8? Blonde said 4 please.

There is no way I could possibly eat 8 slices.

I figured it would add some spice to my life.

88. My fortune teller is such a fraud, said my dad would live a long life but he died at 51?

I wish my dad could live longer like our chef who completed 73 years yesterday.

89. What does an upset chef make food with?

90. Why did the Catholic chef sanitize his crucifix while preparing Sunday brunch?

91. Its good that the Japanese chef is recovering from his alcohol addiction?

92. The police raided the kitchen of a restaurant where the chef was preparing Eggs Benedict,

He was arrested for poaching.

93. What do you call the leader of Amazon Cooking?

94. I used to assume that if a chef is fat, it means that their food is good.

Then I learned: Never judge a cook by his blubber.

95. What did the chef say after he lost his favorite spoon?

96. My blond wife said she was a gourmet chef, I asked her to make ceviche.

97. What do chefs research?

98. When my wife came home with a puppy, I knew better than to question her.

She’s the chef, after all.

99. Did you hear about the Pizza Chef with no driver’s license?

He could dish it out but he couldn’t take it.

100. Everyone was shocked when the chef started talking foreign during a culinary show.