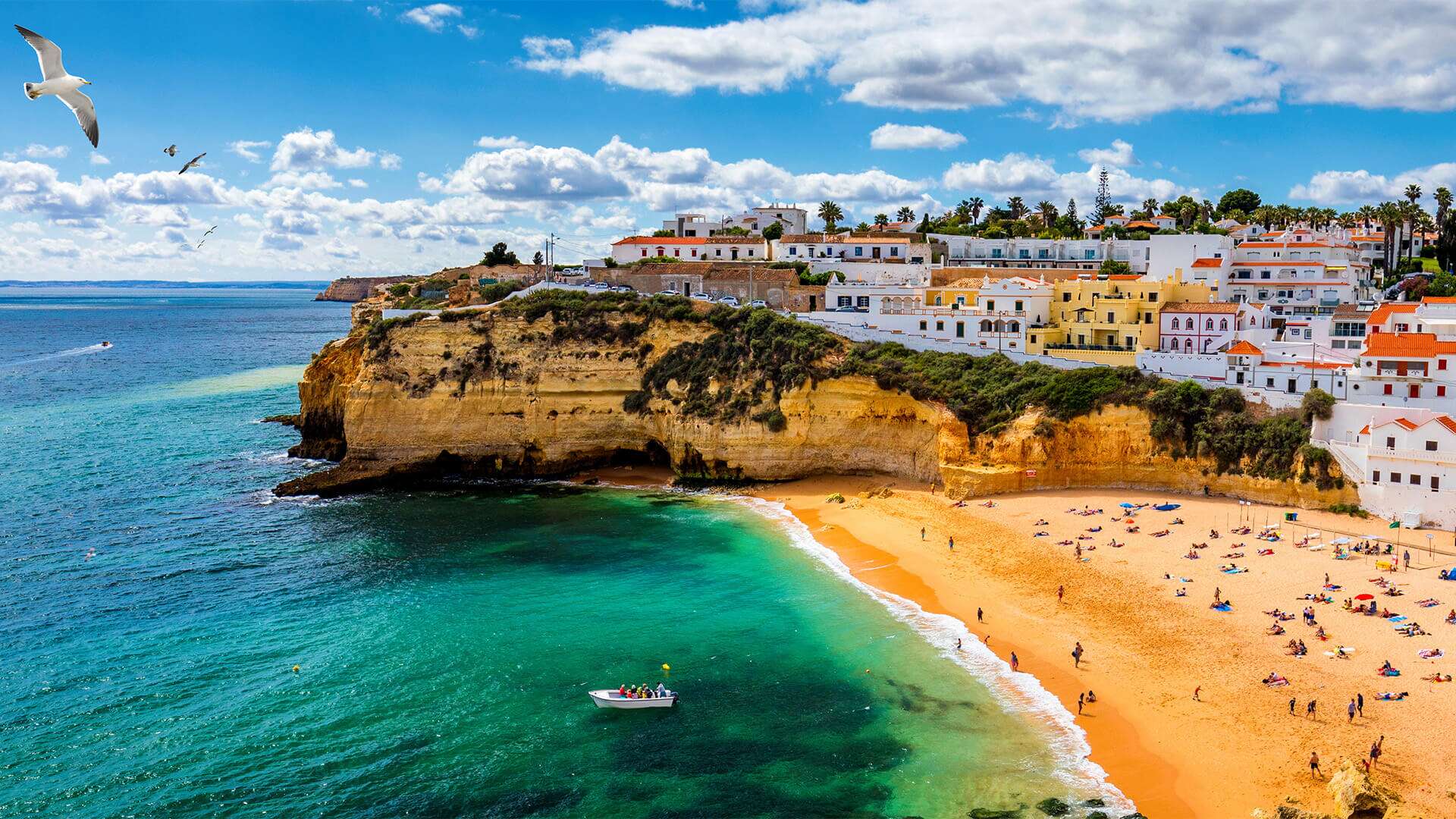 Portugal is a country with rich history that can be felt throughout its thriving cities and down to its picture-perfect villages. Home to the popular Vasco Da Gama explorer.

The 16th Century marks the time Portuguese explorers first reached Japan before any other European nation. Their visit left a linguistic mark. For instance, Portuguese words such as pan which means bread and sabato meaning Saturday are all used in Japanese language.

Portugal has heavily invested in renewable energy. To a larger extent, that in 2016 the entire country ran for five consecutive days entirely on renewable energy powered by wind, sun and water.

How well do you know the Portuguese music genre – Fado? It is a mournful and heart-touching style of folk music typically sung by common people and passed down through generations orally.

Want to know more about Portugal? Take up the following Portugal trivia questions and answers.

At 12.3km in total length it is currently the second-longest bridge in Europe.

2. You have arrived at Lisbon, the country’s capital, and are looking at a tower that is a World Heritage Site, as well as a symbol of Portugal’s seafaring past. It is called the Tower of?

3. Which famous engineer designed the 1878 Maria Pia bridge in Porto- then the longest single-arch span in the world?

Construction started on 5 January 1876 and the bridge was opened in November 1878 by King Luis I and his Queen, Maria Pia of Savoy.

4. Lisbon was destroyed by what natural disaster in 1755?

5. What drinking habit did a Portuguese queen introduce to England in the 17th century?

No, it wasn’t port it was tea!

6. Portugal is the world’s largest producer of what environmentally-friendly product?

7. What is the currency in Portugal?

8. What two villages are connected by the shortest international bridge crossing in the world?

9. On what peninsula does Portugal lie?

10. Lisbon is home to which world’s oldest business?

11. On which continent is Portugal?

12. What famous vehicle flew crossed the Portuguese coast in April 1936 at the start of a record-breaking transatlantic crossing?

13. My hometown has many attractions. I visited the cathedral, the university, a Roman temple and a chapel with walls made of human bones. So where am I from?

14. Name the famous explorer who some claim was a Portuguese spy and named a Caribbean island after his Alentejo hometown?

15. Which of these Portuguese lakes is the largest?

16. What’s the name of the Portuguese water dog owned by a former US president?

17. What was the bad event that happened to Portugal’s capital in 1755?

18. What invention did Portuguese-Brazilian priest Bartolomeu de Gusmão try to pioneer at the start of the 18th century?

Lighter-than-air airship design. While studying in Coimbra, he developed a fire-powered balloon.

19. Who officially discovered the island of Porto Santo and nearby Madeira?

The ethno-linguistic group of peoples and nations across the world that speak the Portuguese language.

21. The Islands Desertas, part of the Madeira Archipelago, contains how many islands?

22. What is the main ingredient of the dish with a name often translated as Bacon from Heaven?

23. Madeira is part of what country?

24. What is the Portuguese name for Lisbon?

25. Why was the Catholic church hugely embarrassed by the 1755 earthquake that flattened Lisbon?

The church was left with a red face because the earthquake – plus tsunamis and fires – happened on the morning of All Saints’ Day.

26. Which is the longest river found totally within Portugal’s borders?

27. Lisbon is composed of how many hills?

28. Portugal has a geometrical shape. What does this country look like?

29. Lagos is famous (or infamous) for holding the first of what type of market in Europe?

Lagos was home to the first slave market in Europe after slaves from Africa were brought to the town in 1444.

30. What is the name of Portugal’s second city, famous for its beautiful hills and fortified wine?

31. In 1761 Portugal became the first colonial power to do what?

They just sold slaves to other countries. And things weren’t exactly rosy for many of those living in Portuguese colonies either.

32. What structure connects the center of Lisbon, Portugal to the old part of the town at the top of the hill?

33. What drinking crime is the Bishop of Norwich alleged to have committed in 1685?

He possessed a prodigious capacity for wine consumption.

35. In 2008, Portugal led the world by opening the first what near Povoa de Varzim?

This was the opening of the world’s first commercial project to generate electricity from wave power.

This was a parade of Santas in December 2010

37. What is the approximate 2004 population of the metropolitan area of Lisbon?

38. What bird features on Lisbon’s coat of arms?

39. The village of Camara de Lobos has a typical drink. What is its name?

40. Portugal and the UK jointly hold, what?

They have the oldest unbroken international alliance, a treaty that was originally ratified in 1386l

41. What is the capital of Madeira?

42. Portugal is famous for what ‘polished stones’?

43. Lisbon is on the northern bank of which river?

45. The most western point of Europe’s mainland is a cape in Portugal. Which one is it?

46. When a census was conducted in 2011, how many inhabitants did Portugal have?

47. Many tourists visit Portugal every year to play what sport?

48. Portugal expelled which occupier in the 10th century?

49. What is the highest point in mainland Portugal?

50. Here’s an example of the Portuguese language. What does “estás bem?” mean?

Are you all right?

51. What is the second largest city in Portugal in terms of population?

52. What’s the main language in Brazil?

53. As we drive around sightseeing, everyone tells us to see the “barcos rabelos”. What are these?

54. Who attacked Madeira in the 16th-century?

55. What is true about the Pico do Arieiro?

It is one of the highest mountains on Madeira at 1.818 m

56. Lisbon’s old quarters are dominated by a castle, can you name it?

58. Do you know how many islands are in the Azores?

59. You hear some stories about hidden treasure and decide to head east to Tomar, where you hope to find some clues to the holy grail, the philosopher’s stone or some other Templar-buried treasure in which World Heritage Site?

60. The old name for Lisbon was what?

61. Which region is north of Algarve?

The evaporation of wine or spirits as it ages in casks

63. The British presence in Madeira was a result of what?

64. The town of Santana is famous for what?

Its triangular thatched houses which are unique to Madeira

65. Lisbon was recently the venue for the ‘World Expo’, in what year?

66. What is the population of Portugal?

67. There is only one major Portuguese river that flows south to north. Which one is it?

68. Lisbon was protected from the Napoleonic armies by what feature?

A line of towers

69. Which city is 50 kms south of Lisbon and is famous for its fish restaurants?

70. What is the name of the capital of Porto Santo?

71. What is the Portuguese political system?

73. What’s the name of the Portuguese navigator that discovered the sea route to Brazil?

74. Which village in region of Lisbon is a UNESCO world heritage site?

75. How many miles long is the Portuguese mainland coastline?

76. Which famous politician used to paint in the picturesque fishing village of Camara de Lobos?

77. About how many people live on the Madeira Islands?

80. Do you know where was world famous football player Cristiano Ronaldo born and raised?

81. The whaling scenes from John Huston’s film version of Moby Dick were shot in what village, which also was once the centre of Madeira’s whaling industry?

82. When do the people on Madeira celebrate Freedom Day?

83. On the southern bank of the Tagus River, and looking toward Lisbon is a huge statue of whom?

84. The oldest bookstore in the world is located in Lisbon, do you know its name?

86. Which Portuguese town is popularly known as the “Cradle of the Nation”?

87. What are the main colors in the Portuguese flag?

88. The motto of the Azores “Antes morrer livres que em paz sujeitos” can be found on the Coat of Arms. What does this phrase translate to in English?

Rather die free than in peace be subjugated

89. Where would you find acordas, caldeirada, and bacalhau?

On a dining table

90. Which famous person stayed in the Quinta Vigia?

91. Where can you ski in Portugal?

92. Which is the most popular sport in Portugal?

93. Into how many administrative districts is Portugal divided?

94. What is the capital city of Beira Alta?

96. A Port that has been made from lighter grapes, and is sometimes aged in wood, so it changes colour quickly is called?

97. Sport Lisboa e Benfica, commonly known as Benfica, is a Portuguese sports club based in Lisbon. Founded in 1904, they have an eagle as the logo. At what stadium do they play their home games?

98. What is the medieval quarter in Lisbon called?

99. What is Ginja de Óbidos, Once offered as the wedding gift from Portuguese kings to their queens.

100. In which city is there a bridge built by Gustave Eiffel?