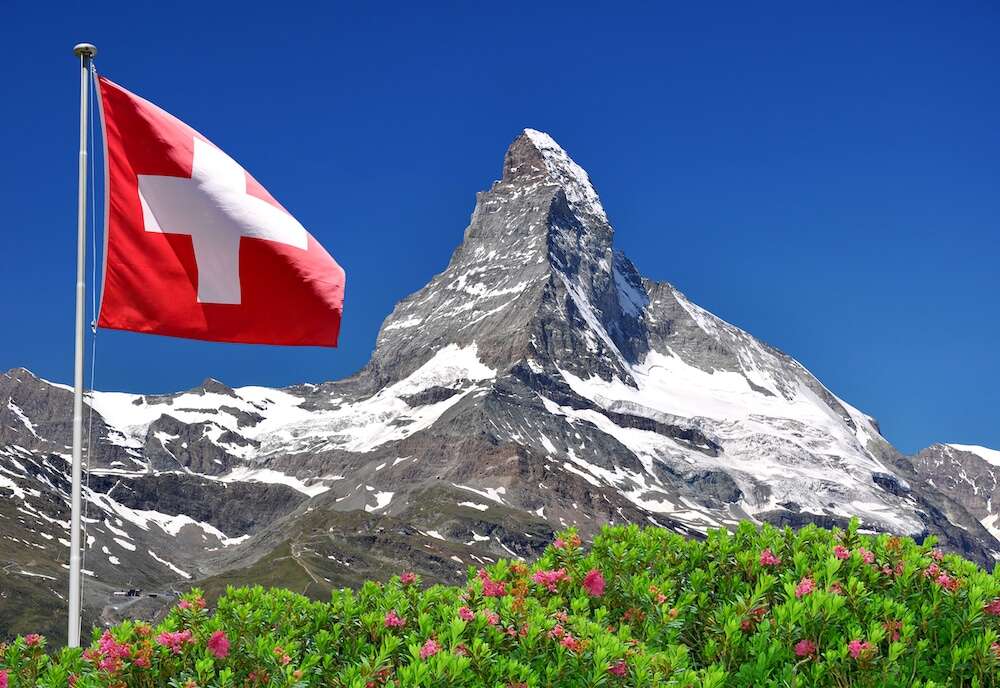 Switzerland is the most innovative country in the world. With a fast-growing economy, it is among the most expensive places to live in. Despite that, you will still get value for your money.

The Swiss speak about four international languages; French, German, Italian, and Roman. So with any of these language skills, you’re good to go.

One great geographical fact is that Switzerland has got at least 208 mountains and the highest peaks in Europe. If you’re a hiker, exploring the Haute Route would make a beautiful experience.

Want to grab a cuppa of some of the most expensive coffees in the world? Swiss coffee is yours to go to.

Check out this list of Switzerland trivia questions and answers to find out more interesting things about the country.

1. This Swiss city is relatively small, but it is usually crowded because it is a popular hub for tourists hoping to visit and climb the nearby Matterhorn. Which city in Valais canton is this?

2. To which year did Switzerland date its independence?

3. Which lake in Switzerland, the fifth largest in the country, has its water level maintained by an unusual structure known as a needle dam?

4. Which is the capital of Switzerland?

5. Around which mountain in Switzerland is it possible to ride the world’s first revolving cable car?

6. Who is known as Swiss Miss?

8. A majority of the Swiss population speaks a variety of German as their first language. French and Italian are also official languages. What is the fourth official language of Switzerland?

9. How many cantons are in Switzerland?

10. What is the population of Switzerland?

11. How many medals were won by Switzerland in Athens Olympics 2004?

12. Which cantonal capital lies exactly on the language frontier between German and French and is bilingual?

13. Which city is the seat of the International Labor Organization?

14. People of this Swiss city in Vaud canton overwhelmingly speak French, which makes sense since it practically borders France. It is home to many sports organizations’ headquarters, including the International Olympic Committee. Which city on the shores of Lake Geneva is this?

16. Why is Pilatus also known as the Dragon Mountain?

Pilatus is rumoured to have been home to flying dragons

17. Who is protected by Swiss Guards?

18. It seems silly to ask for “Swiss” cheese in a Swiss restaurant. What would the natives call this cheese if they ordered it in Switzerland?

19. Which mountain range in Switzerland?

20. What percentage of Switzerland is covered by mountain ranges?

22. This city lies close to the northeastern border of Italy, which explains why it is the largest Italian-speaking city outside of Italy. Which city is this that sometimes goes by the nickname the “Monte Carlo of Switzerland”?

23. Which is the national flower of Switzerland?

24. Which is the national anthem of Switzerland?

25. What is the most practiced religion in Switzerland?

26. Where does World Economic Forum hold its Annual Meetings?

27. We all know the Alps cover much of Switzerland, but what other mountain range runs through the country?

28. Where did fictional characters Sherlock Holmes and Professor Moriarty engage in a hand to hand fight?

29. Ticino is the only Italian-speaking canton. Which is the name of its capital?

30. Who along with Walter Haworth won the Nobel Prize for Chemistry in 1937?

31. Like many other countries, Switzerland’s capital city and largest city are different. Its capital is Bern, but which city is the country’s biggest, in terms of area?

32. On which mountain in Switzerland can you visit the Ice Palace?

33. Which are the two Houses of Swiss Parliament?

Council of States and National Council

34. Our travels take us to the mountainous areas of Switzerland, and we tour the glacier near the Eiger, and marvel at the valley of the cascading waterfalls near Lauterbrunnen. Our hotel is located in the nearby resort town whose name literally means “between the lakes”. Where are we staying?

35. On what body of water is Geneva situated?

36. What is the area of Switzerland?

37. Which is the name of the capital of the biggest canton?

39. The highest point in Switzerland, Dufour Peak, is a mere 40 miles/70 km from the lowest point in the country, Lake Maggiore, and the town of Ascona is located on the shores of the lake. Which feature, not usually associated with Switzerland, will you see in Ascona?

40. Which is the currency of Switzerland?

41. This ski town has hosted two winter Olympic games. What is the name of this town?

42. Murten, with its well-preserved medieval walls, is a popular tourist destination near Bern. Murten is the German name for the city, but it also has many French-speaking residents. What is the French name for Murten?

43. Which city is known as Switzerland’s San Francisco?

44. What is the area of Switzerland?

46. This next city’s name translates to New Castle in English from German, French and Italian. It is located in the Jura Mountains and is a center for Swiss watchmaking. Which French-speaking city is this?

47. Which four cantons begin with the letter S?

48. Switzerland is often represented by the international code “CH”, which stands for Confoederatio Helvetica. From what does the name “Helvetica” derive?

49. The highest train station in Europe is 100 years old this year. What is it called?

50. The Matterhorn was the last major mountain of the Swiss Alps to be climbed. Who was the first woman to successfully climb the Matterhorn in 1871?

51. What do the letters CH stand for?

52. The Swiss national hero, William Tell, shot an arrow from his crossbow at 50 paces to hit an apple placed on his son’s head. Why was he forced to do this?

For failing to bow to the Austrian colors

53. Which is the furthest north: Bern, Lucerne, or Chur?

54. The Centovalli train passes through a series of picturesque villages. One end of this line terminates in Domodossola, Italy. Which Swiss city lies at the other end of the line?

55. Which canton has the most cows?

56. What is Switzerland’s largest glacier?

57. Who is the current President of Switzerland?

58. Which Swiss town is famous for its annual jazz festival?

59. Which is the oldest brand: Nestlé, Omega or Victorinox?

60. The Rhine Falls is a popular tourist destination in the northern part of Switzerland. Which Swiss city is home to the Rhine Falls?

61. Five cantons have never had a Federal Councillor. Name two?

62. Herisau is the capital of the Canton of?

63. Which war was finally ended by the Treaty of Lausanne?

64. The name of Theodor Tobler is associated with the creation of which of these Swiss favorites?

A bar of chocolate

65. In which year did Swiss women get the vote at the federal level?

66. The last three questions are about my favourite mountain in Switzerland. Name the actor who starred in the 1975 film called “The Eiger Sanction”?

67. Roger Federer won his 7th Wimbledon singles’ title this year; when did he win his first?

68. What is the most commonly spoken language in Switzerland?

69. Which country won its first football World Cup in 1954 final, known as The Miracle of Bern?

70. What is the French name for Lake Geneva?

71. How many medals did Switzerland win at the 2012 Olympic Games?

72. If you were to visit the city of Geneva you’d no doubt see the Jet d’Eau from anywhere around the world-famous lakeshore. What is the Jet d’Eau, exactly?

73. Which team are the current Swiss Football Champions?

74. As we drive along the border of Switzerland, we come to the independent principality of Liechtenstein, and drive through its capital, Vaduz. Before we know it, we are out of this country again, but we are not in Switzerland, either. Which country are we in?

75. Which Swiss ski resort has twice hosted the Winter Olympics?

76. What is the total literacy rate in Switzerland?

77. Which British author wrote Treasure Island while recuperating in Davos?

78. Switzerland’s capital, Bern, was the site of a heated conflict in 1954. Who were the opposing forces in the Battle of Bern?

79. Jean-Jacques Rousseau was born 300 years ago this year but in which Swiss city?

80. A direct alpine-related question. At 15,203 feet, what is the tallest mountain in Switzerland?

81. What was the first name of William Tell’s son, the one who stood under the apple?

82. From its name, it is clear that Interlaken lies between two lakes. One of them is Lake Brienz. What is the name of the other lake?

83. For which sci-fi film did Swiss artist H R Giger win an Oscar for Best Visual Effects in 1980?

84. What is the name given to the warm, dry wind that occasionally blows in the Alps in winter?

85. She was born in Strasbourg, lived in Bern, and died in London in 1850, but by what married name is Marie Grosholtz better known?

86. There are many capitals that have the same name as the Cantons. There are three below, which one is the odd one?

87. How many stars are round the edge of the current 1- and 2-franc coins?

88. What is the name of the river that passes through the Swiss capital, Bern?

89. Which capital has been named after an Irish Saint who founded a monastery there?

90. Only two countries have a square national flag: Switzerland and?

91. The castle of Chillon inspired Lord Byron’s poem, “The Prisoner of Chillon.” If you’d like to visit Chillon, to what city would you travel?

92. In which Swiss city is Europe’s largest clock face?

93. Some visitors may travel to this region of Switzerland to ascend the Santis, one of the tallest peaks in northeastern Switzerland. But in the region they can also find many small villages that preserve traditions in arts and crafts, music, costuming, and politics. What is the name of this region that is made up of two half-cantons?

94. Which car maker emigrated from La Chaux-de-Fonds to Detroit?

95. Which cantonal capital is the host of the United Nations Organization?

96. How do you say Switzerland in Roman?

97. Although the principality of Liechtenstein is not a part of Switzerland, it does use the Swiss currency. What is the capital of this principality?

98. Which cantonal capital is also the seat of the IOC?

99. The most spoken language in Ticino is Italian. True or false?

100. In which Swiss city was Roger Federer born?