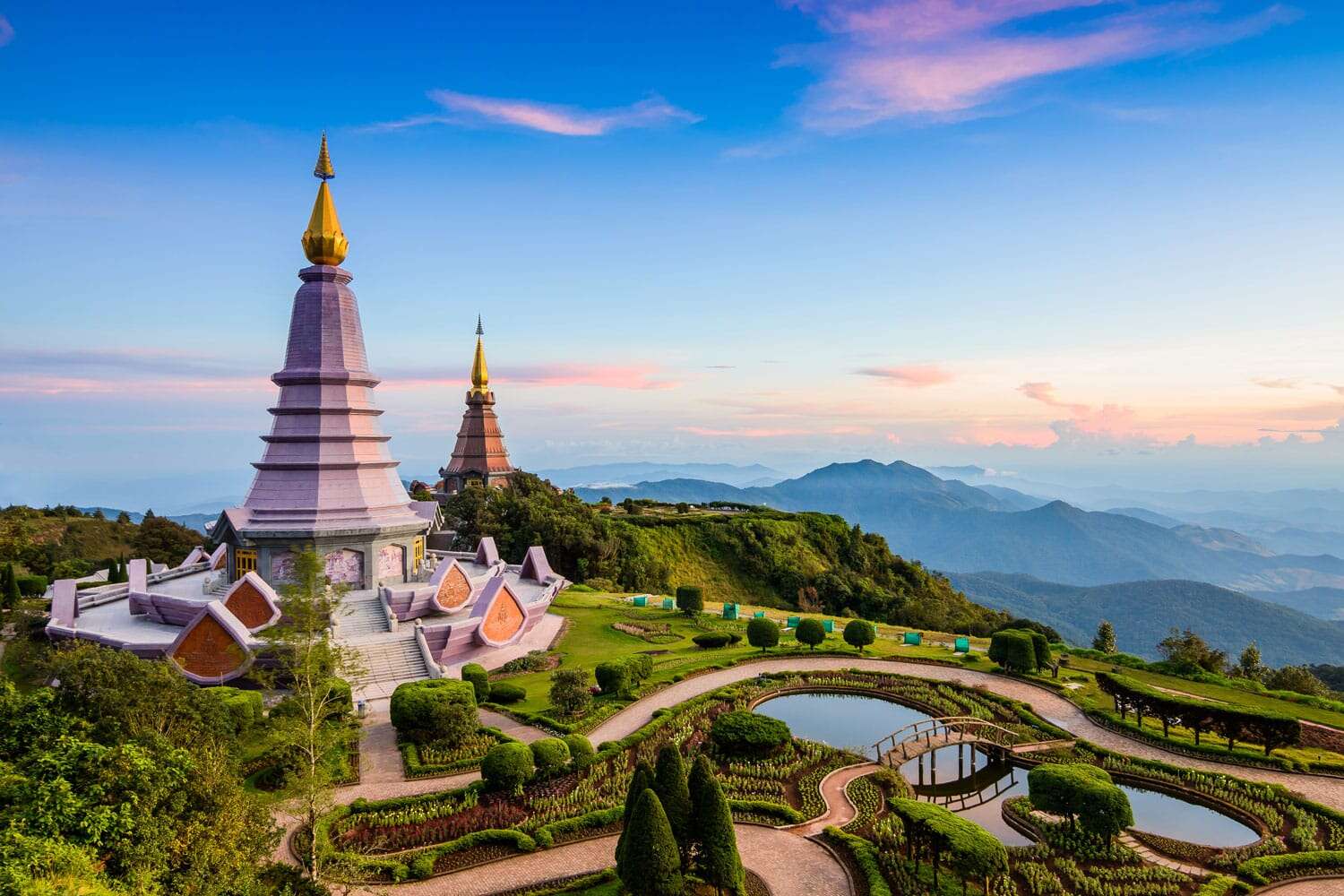 In Thailand, rice is such a staple food that it stands alone in its own category. It is an essential part of every meal, including breakfast. Thai people commonly say hi by asking “have you eaten rice?’

Thailand is the world’s largest exporter of orchids. There are 1500 orchid species that grow in the wild areas of the Country.

Are you an Animal Lover? The smallest mammal in the world – the bumblebee bat can be spotted in Thailand. The Country is also home to Siamese cats.

To greatly understand Thailand, take part in the trivia below.

1. What does “Thai” actually mean when translated to English?

Land of the free

2. Thailand shares borders with four nations. Which nation has the longest border with Thailand?

3. What is the capital of Thailand?

4. Our flight lands here in the capital of Thailand, which is of course Bangkok. In which region of Thailand is Bangkok located?

5. What’s the other name do Thai people give to Bangkok?

6. Thailand’s official motto is “Chat, Satsana, Phra Maha Kasat”. What is the English translation of its motto?

7. What is the currency in Thailand?

8. What country was the colonial power in Thailand during the nineteenth century?

Thailand has never been a colony

9. What is the most common language spoken in Thailand?

10. There are seventy-seven provinces in Thailand. How many of these are located in the vast Isaan region?

11. What is the most popular religion in Thailand?

12. Where is Big Buddha Beach?

13. What is the national dish of Thailand?

14. Bangkok is usually referred to as “Krung Thep” by the Thai people. What does this mean?

15. What is Thailand’s national sport?

16. This king of Thailand was born in the USA?

17. Which city is known as “Sin City” in Thailand?

18. Thailand is approximately the same size as which of the following?

19. What small peninsula famous for its high limestone cliffs and sandy beaches is located directly to the east of Phuket in the southwest of Thailand?

20. What is the official name of Thailand?

21. On which river is Bangkok located?

22. In what province are the famous Similan Islands?

23. What is the ethnic group of most of the inhabitants of the Isaan region of Thailand?

24. What is the English translation of “khruang bin”?

25. What does “Thai” actually mean when translated to English?

26. What city in northern Thailand is translated as “New Town”?

27. What is the name of Bangkok’s international airport?

28. There are 1430 islands in Thailand. Which island became well known as it was featured in the film “The Beach”?

29. Bangkok is subdivided into how many districts?

30. The Isaan people speak a language that has many similarities to what two other languages?

31. Which continent is Thailand located in?

32. What sport are you watching if you are at Lumphini Stadium?

33. How many provinces are there in Thailand?

34. What important Asian river forms part of the eastern border of Thailand?

35. Who was the first female prime minister of Thailand?

36. The official city seal of Bangkok features a shape similar to which animal?

37. A major highway that brought much development to the heart of Isaan is Highway 2 or Thanon Mitraphab. What is the English name for this road?

38. Which country does not border Thailand?

39. The Similan Islands, Phuket Island, Phi Phi Island, and the west coast of the south of Thailand are on which sea?

40. Which is the largest city in southern Thailand?

41. What is the name of the river which bisects Bangkok?

42. What is Thailand’s most important crop?

43. What is the name of a famous motor-tricycle in Bangkok?

44. If you are flying to the destination with IATA code HKT, where are you going to?

45. Up here in Isan, you can really get high up, over 200 meters high. The region sits primarily on a massive plateau. What’s the name of this great plateau?

46. What is the political system in Thailand?

Sunbathing on the beach

48. What kind of tourist attraction is the enormous ‘Chatuchak’?

50. Geographically, Thailand covers an area of how many square kilometers?.

51. The east coast of Thailand is on what body of water?

The Gulf of Thailand

52. Which province in Thailand is famous for its paper umbrella?

53. What other name do Thai people give to Bangkok?

54. The infamous Bridge over the River Kwai was constructed during World War II by many POWs and laborers who lost their lives. In which province is this bridge located?

55. Which is the second largest island in Thailand?

56. Thailand’s prevalent religion is what?

57. The first King of The Chakri Dynasty came to power in which year?

58. Right in the heart of Bangkok is the official residence of the kings of this nation. What is its name?

60. Phra Viharn Temple is a World Heritage site in a neighboring country to Thailand. The area around the temple is disputed territory between Thailand and which of it neighbors?

61. Thailand is roughly the same size as which country?

62. What is the national sport in Thailand?

63. Where are you if you are just about to take the BTS?

At a train station

64. Who was the first Prime Minister of Thailand?

65. In historical times, this was the center for assembling people and for garnering an education?

66. Thailand is bordered by which 4 countries?.

67. Which bug is considered a delicacy in Thailand?.

68. What is the name of the southwest wind that brings the rainy season in summer?

69. Another site to visit in Bangkok is the Wat Pho Buddhist Temple. What is unusual about the statue of Buddha in this complex?

He’s reclining on his side

70. The former King Bhumibol Adulyadej was born in which country?

71. What is Thailand’s second-largest religious group?

72. Which of the following major newspapers is based in Bangkok?

73. Thailand consists of how many provinces?

74. What did King Rama IX do with the profit made from sales of his best-selling books?

He gave it to charity

75. In what year were Thai people legally required to have a surname?

76. Which figure is closest to the year 2009 population of Thailand?

77. What is Thailand’s national sport?

78. If we want to call Thailand from any other country in the world, what calling code do we use?

79. The Songkran festival takes place to celebrate what event?

80. What was the most widely spoken language in Bangkok in 1900?

81. In what year did Thailand become a constitutional monarchy?

82. Where did the Chiang Mai zoo get their pandas?

They were loaned from China

84. The city of Chiang Mai in the north, is on what river?

85. Name a martial art, or combat sport, of Thailand?

86. What year did former King Bhumibol Adulyadej start his reign as King?

87. Located off the east coast of the Kra Isthmus in the Gulf of Thailand, what island is the second largest in Thailand?

88. Somtom is a delicious Isaan dish that is enjoyed by people all over Thailand. What is a common name for this dish in English?

89. What is Thailand’s official calendar?

Eastern version of the Buddhist era

90. Which renowned musical includes the song “One Night in Bangkok”?

Guard yourself and aim your gun at others

92. What is the most important mineral found in Thailand?

93. In Kalasin Province there is an impressive museum based on which animals in Isaan?

94. Somluck Kamsing is Thailand’s first Olympic gold medalist. He is from Khon Kaen Province in Isaan. For which sport did he win a gold medal in 1996?

95. The Bun Bang Fai Festival is famous for?

97. Which James Bond movie was filmed in and around Thailand?

The Man With The Golden Gun

98. Where does the Saen Saep boat service operate?

On a canal in Bangkok

100. Which beach resort was popularized in the 1920s by King Rama VII, and is closely associated with the Thai royal family?

The area where Thailand, Myanmar and Laos meet

103. Which airline paints the nose of their planes to look like a bird?

104. Which city is famous for monkeys?

105. Which island is famous for its full moon parties?

106. King Power MahaNakhon is famous for?

For having the the highest observation deck in Bangkok

108. Which island is best known for scuba diving?

109. Yala and Narathiwat border which country?

111. How many hours ahead of GMT is Thailand?

112. Which well-known Thai dish was invented by the Thai government in the 1930s?

113. What is best selling beer in Thailand?