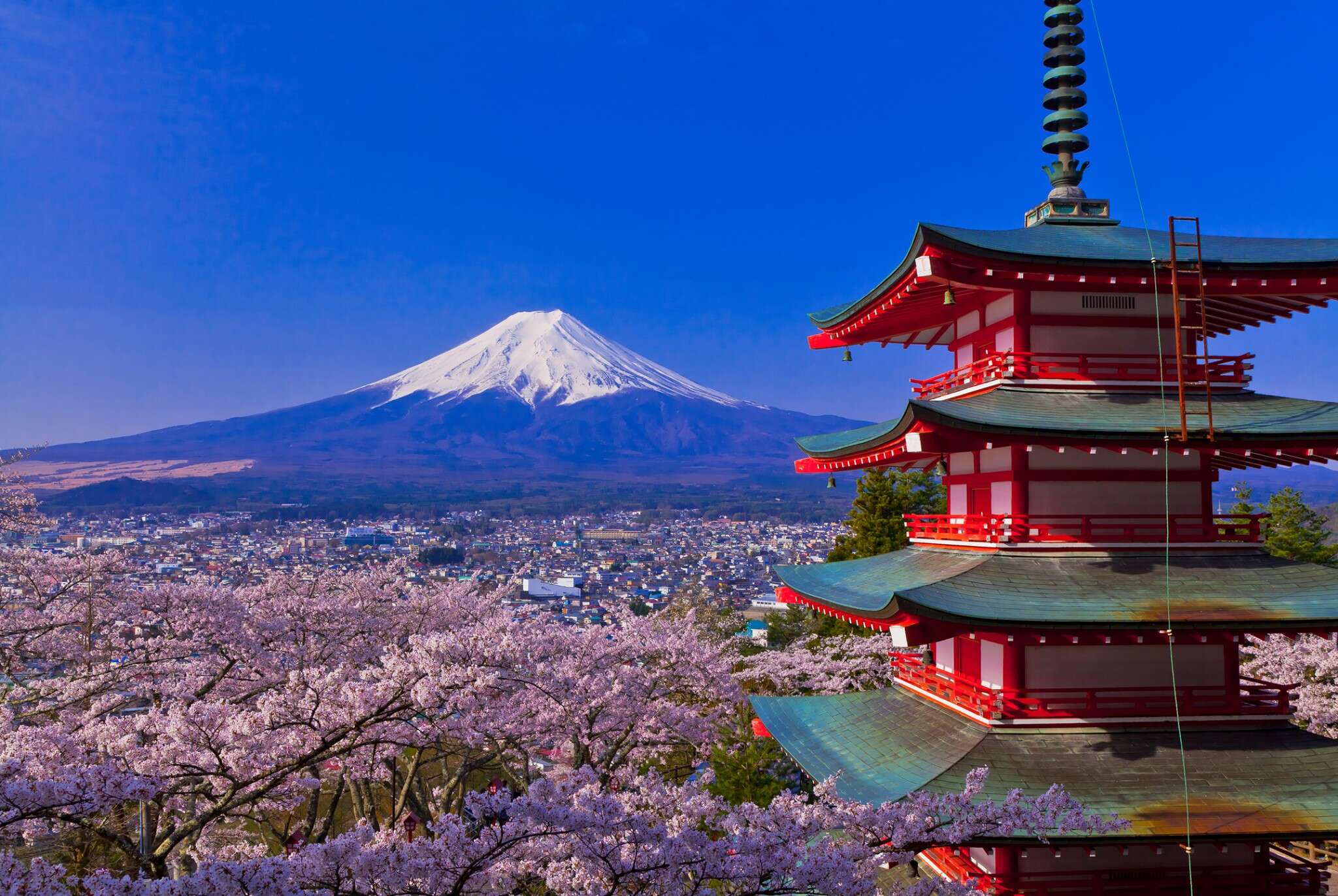 Japan is a popular destination for most travelers. The bustling cities, unique cultural heritage, and beautiful geographical sceneries make it a must-visit place.

Did you know that watermelons are so expensive in Japan? These precious fruits play a significant role in the Japanese gift-giving culture.

The country’s most valuable coffee known as Blue Mountain is highly sought after. If you’re a sucker for coffee, this gourmet will do your taste buds some justice for its mild flavor and absence of bitterness.

Tokyo is well-known as the solo dining capital of the world. An increase of single-person households coupled with the country’s shrinking population has made reserving a table for one quite the norm.

Want to know more about the country? Check out our amazing list of Japan trivia questions and answers.

1. Name the largest and most populated Japanese island?

2. What is the current capital of Japan?

3. Four matches were hosted in this venue, the City of Toyota Stadium. In which prefecture is Toyota City located?

4. What is the Japanese name for Japan?

5. What is the snow monkey, also called Japanese macaque, known for?

It is the northernmost primate on Earth

6. The northernmost of the main islands of Japan is Hokkaido. This island is also a region with the capital city Sapporo. Which river is quite nearby?

7. By what name was Emperor of Japan who reigned for over 62 years until his death in 1989 best known?

8. Which quarter in Tokyo is known for the colorful and vibrant street fashion?

9. Let’s start with a visit to Japan’s smallest prefecture. Despite its size, it’s the mecca for udon noodles, and is the first place where olives were successfully grown in Japan. Which prefecture are we hitting first?

10. Name the longest (and widest) river in Japan?

11. What is the traditional dress of Japan?

12. Which city, host of the 1972 Winter Olympics, is also the largest on the island of Hokkaido?

13. Which sacred animal can you find wandering in the Nara Park?

14. Which company’s slogans have included ‘be moved’, ‘make believe’, and ‘like no other’?

15. What is the symbol of Shinto, the indigenous religion in Japan?

16. Welcome to Kyoto! After centuries as Japan’s Imperial capital, the city is packed with some of the most beautiful and enduring sights of Old Japan. Yet we’ll be arriving in very modern style, on a shinkansen to the heart of town. How and where are we getting into Kyoto?

By bullet train to Kyoto Station

17. Fuji is a sacred symbol of Japan. What is it actually?

18. In Japanese culture, what is a katana?

19. When was the last time when Mount Fuji erupted?

20. What is the population of Japan?

21. Which sixth-largest city in Japan shares its name with the first name of a retired American basketball player?

22. The Shinkansen is the network of high-speed railway lines in Japan. The design of the bullet trains running on this network was inspired by which animal?

23. What are the two main religions of Japan?

24. What do waiters or waitresses say to welcome guests in Japanese restaurants?

25. What does Sushi mean in Japanese?

26. Which Japanese mountaineer was the first woman to reach the summit of Mount Everest?

28. Popular in Japan, what are manga?

30. What is the station name of the area home to the bulk of Tokyo’s major museums?

32. The Obon festival, one of the major holiday seasons in Japan, takes place during which season of the year?

35. Since the end of World War II, which was the first country that Japan send the military forces?

36. What makes traditional Japanese-style toilets different from those seen in America?

They are in the ground

37. Name the sea strait between Honshu and Hokkaido?

38. When will Japan host the Summer Olympic Games for the second time?

39. Can you name the world famous upscale shopping area in Tokyo?

40. What is the oldest university in Japan?

42. Tokyo International Airport is commonly known by what name?

43. What is the second-largest city in Japan based on population?

44. According to UNESCO, what has ‘inspired artists and poets and been the object of pilgrimage for centuries?

45. Which city in Japan is known as the “kitchen of Japan”?

46. This city is a gateway to the Chugoku region and Shikoku Island and is where the Korakuen Garden, which is one of the three best in Japan, is. Not far from this city is the preserved Japanese city of Kurashiki. Name it?

47. What is the name of Japan’s national parliament?

48. Tempura is a typical Japanese dish that consists of veggies, meat, and seafood that are battered and deep-fried. However, from which country does the dish actually originate?

49. Cotton was originally an imported luxury item and it wasn’t widely cultivated and worn until the 18th century. Before that, work clothes were made from hemp and other bast-fibres. Which of these fibres is not traditionally used in Japan?

50. Which sport in Japan is the most popular in terms of television ratings and spectators?

51. Tsukiji in Tokyo is the largest market in the world for which food?

52. What is commonly known as Hinomaru?

53. Which typical Japanese wine is made from fermented rice?

55. What is the main subject of Bonsai, a world-renowned art form?

56. Hanami is the centuries-old tradition of picnicking under a sakura tree; by what name would we know this tree?

57. Lexus is the luxury vehicle division of which Japanese automaker?

58. What local term is used to refer to the Okinawan language (Naha dialect)?

59. Which city gained publicity around the world and in the USA in 2008, since it had the same name as a certain politician?

60. What do we call graphic novels or comics originating from Japan?

61. Which Japanese fictional character is described as a young female cat with no mouth and a red bow?

62. Who was the prince that founded Buddhism in Japan?

63. Which philosophical school of thought had influences on the Silver and Gold Pavilions in the Kyoto style of art?

65. What is the official currency of Japan?

66. Which two colors are on the national flag of Japan?

67. The Genroku Kabuki theatre was so named not only to describe the grand and colorful style, but etymologically so named to mean ‘wild and deviant behavior’. What social-economic class did Kabuki originally describe?

68. Based on geographical location, which area does Japan belong to?

69. What is the name of the company that makes Panasonic products?

70. Which flower is the symbol of the Japanese Imperial family and Emperor?

71. Japan is an archipelago of 6852 islands. How many islands comprise the main islands, also known as the Home Islands?

72. Which Japanese island is a tropical paradise of jungles and beaches as well as a unique cultural hybrid?

73. We go to the north of the island Honshu. Fukushima, the site of the nuclear disaster in 2012, is situated on the Abukuma River. Which of the following lakes is less than 80 km (50 miles) from Fukushi?

74. When did Hirohito rule Japan?

75. Japan is made up of islands. How many islands does Japan have in total?

76. What is a traditional Japanese inn called?

77. The ‘Six Trees’ area of Tokyo is one of the major entertainment districts in the whole of Japan. Which name means ‘Six Trees’?

79. Japan’s total population is approx. 127 million, but which European country is similar in size according to landmass?

80. Which flap is worn on top when you wear a traditional kimono?

81. Which Japanese film was remade as The Magnificent Seven?

82. How tall is the iconic Mount Fuji?

86. Which is National Foundation Day?

87. Kyoto is famous for its stunning geisha. But what does the word ‘geisha’ actually translate to?

88. Japan is an up-and-coming hiking haven, but which of these timeless walking trails is over 1,000 years old?

89. Many residents of Hokkaido are familiar with a certain American firm, from which they order many things through the mails. What firm is this?

90. What is the top operational speed of the Shinkansen aka The Bullet train?

91. Which train line travels in a continuous loop around central Tokyo?

92. How high is Mt Fuji-the highest mountain in Japan?

94. On what occasion would a man wear a white kimono?

95. Who is the largest and most profitable Japanese company and the second-largest automaker in the world?

96. The Japanese call their country “Nippon” or “Nihon”. What does this mean?

Source of the sun

97. In which region would you find the city of Sendai?

98. Which mask represented the highest level of refinement in early Japanese culture, ca. 794-1185?

99. In the famous ‘Jigoku Scroll’ or Hell-Scroll, what kind of beastly-headed animal did the demons possess to make the shrieking sounds of hell?

100. When did the beloved Studio Ghibli Museum in Mitaka open?

101. Who was the Japanese writer first credited with the Tales of the Floating Worlds?

103. Can you identify this bamboo forest?

104. What is the name of this famous temple?

105. Two group matches were played at Kamaishi Recovery Memorial Stadium which was built to pay tribute to people who perished in the Great East Japan Earthquake and Tsunami on 11 March 2011. In what prefecture is the city of Kaimishi located?

106. Any visit to Kyoto requires extensive temple touring, and ours will be no exception. As we travel through the city, you’ll notice a distinctive gate outside of many shrines. Usually painted a vivid reddish-orange, it consists of two round columns supporting a pair of crossbars: the lower one is straight, and the upper one curves gently toward the sky. What is the name of this type of gate?

107. Tokyo Tower is the spitting image of what other world famous landmark?

108. What do you do to show you are enjoying your soup?

109. Tokyo Tower provides an excellent view of the city (when the smog levels aren’t too high). How high is the “Special Observation Platform”?

110. Which Japanese Major League baseball player once played for the Yomiuri Giants?

111. Late-Edo and Meiji period ‘Sashiko hikeshi hanten’ firemen’s jackets are prized by collectors for their all-over sashiko quilting and their bold, colorful figurative designs. What is the origin of these designs?

112. Takoyaki is regarded as Osaka’s chief culinary showpiece. What is Takoyaki?

113. In the area of Gifu there is a local tradition that fishermen train a certain type of bird for the catching of such fish as trout and ‘ayu’. Which birds are used?

114. What was the first book in Japan to be illustrated by wood-cut prints?

115. The Shinano River, the longest river in Japan, flows through the Niigata Prefecture in the west of the island Honshu. Into which sea does the Shinano River mouth?

116. Tokugawa was made shogun in 1603 and he decided on Tokyo as the seat of his government. However back in those days it wasn’t called Tokyo. What was it called?

117. In what year did the U.S. return control of Okinawa to Japan?

119. The largest city on Hokkaido, Sapporo, was founded in about what year?

120. As an urban dweller, which of the following pieces of junk mail would one be LEAST likely to receive in one’s post box in Japan?

121. Where is Tokyo Disneyland located?

122. How many times has Osaka hosted the World Exposition?

123. Who was the author of the famous story of Genji (manuscript from 12th century)?

124. What style of painting was Japanese artist Utamaro best noted for?

125. Which prominent geographic feature can be seen in Shiga Prefecture, just north of Kyoto?