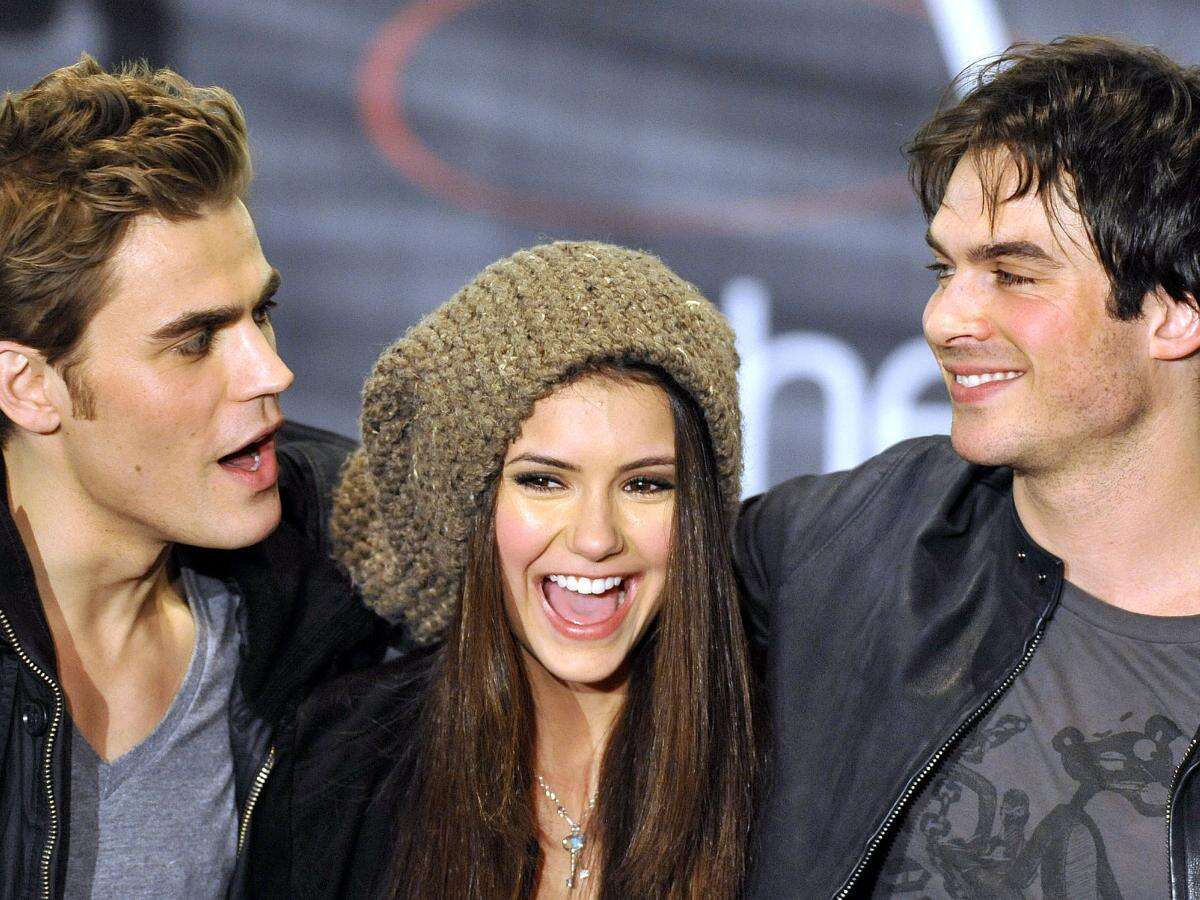 Do you breathe, sleep and dream Vampire Diaries? Does missing the murders and romance of Mystic Falls, get you deep in your feels? Or, does the series inspire your Halloween styles?

We can’t say there is any comfort derived from watching Vampires, but there is certainly something about the Salvatore brothers that keeps us coming back.

The vampire diaries series was the longest recorded vampire show. Amazing fun fact there, right? So, how much can you remember?

These vampire diaries trivia quiz questions and answers are meant to weed out diehards from those who just perused the show when they had nothing else to watch.

Here, take up the challenge!

1. What year did Katherine turn Stefan and Damon Salvatore?

2. What is the name of Joseph Morgan’s character?

3. What state is Mystic Falls in?

4. Who says this quote; “I’ve been in love. It’s painful, pointless, and overrated”?

5. Who got Jenna out of the jail with one phone call?

Stefan is forced to stake her

8. Whose final moments were in paradise?

9. In Season 1, what really brings Alaric to Mystic Falls?

He wants to Avenge his wife’s death

10. Who did Elena Gilbert meet first?

12. What does the herb vervain do?

It protects humans from vampire compulsion

14. John’s wife was Isobel Flemming, together they had__?

15. Why does Katherine turn Caroline into a vampire?

So she can sacrifice her to Klaus

16. Who was the witch who cast the spell sealing the vampires in the tomb under the church?

17. Anna only wanted to open the tomb because of whom?

18. What’s the purpose of the Gilbert ring?

It protects the wearer from death by supernatural causes

19. Who died in the ritual for the sun and moon curse to be lifted to make Klaus a hybrid?

20. Who was a dirty blonde who had her heart ripped out by Klaus?

21. In Season 2, why does Caroline end her relationship with Matt?

She fed off him and feels guilty

22. Who was not an original vampire?

23. In the season 3 finale, who was the one to stab Klaus in the chest?

The first generation of vampires

25. In the pilot episode, when we first meet Damon Salvatore, he gets hit by a car in order to lure the people inside out for him to feed on. Afterward, their pictures are shown on a TV. What are their ages?

26. Who plays the role of Matt Donovan in the show?

n order to become a werewolf, Tyler must kill somebody.

28. In the pilot episode of “The Vampire Diaries”, a man named Darren and a woman named Brooke are driving home from a concert. Who does Darren say the person they just got back from seeing sounded like?

29. Who was Damon’s girlfriend?

30. What happens when Katherine is injured?

31. Who are the two vampires we meet in the season 1 episode “Pilot”?

34. What was Elena’s first reaction when she found out Stefan was a vampire?

She was horrified and frightened of him.

“The Night of the Comet”

37. At the beginning of season 1, Elena Gilbert returned to school following her parents’ tragic death. During her time away from school, she broke up with her boyfriend. What is his name?

38. When was Katherine turned into a vampire?

39. Why does Tyler finally tell his mother he’s a werewolf?

To convince her to free Caroline

40. Klaus has five other siblings whose names we know. What are their names?

41. When is Caroline’s Birthday?

42. What powers does Elena’s necklace have?

43. Tyler is a jock in high school and is an incredibly sporty person. He uses his sportsmanship to try and embarrass somebody at school, but who is the target of his “attack”?

44. What was the name of Candice Accola’s character?

He wants to use her blood to create more hybrids

46. Which one of these characters doesn’t possess any mystical characteristics or powers, in other words, is completely normal?

47. Sara Cannig appears in the show as who?

48. What dead girlfriend does Jeremy keep seeing at school?

On the roof of the boarding house

50. Who killed Elena and Caroline’s roommate?

51. In Season 3, why doesn’t Rebekah attend the homecoming dance at the last minute?

52. In what episode does Tyler become a hybrid?

54. Why does Elena ask Damon to compel Jeremy to leave town?

To keep him safe

55. In “The New Deal”, whose idea was it for Jeremy to be compelled to go and live in Colorado?

56. Who was Stefan’s girlfriend?

57. When do Damon and Elena kiss for the first time?

After he compels Jeremy

58. Who turned Caroline Forbes over to her father to be tortured?

59. Who was the captain of the cheerleading squad?

60. In Season 3, who is Caroline’s date for the formal ball?

61. Who is the mysterious new student at Mystic Falls High?

62. Who did Klaus kill before he drowned Carol Lockwood?

Stefan, because she realizes she met him when her parents’ car crashed.

64. In “The Return”, who did Damon Salvatore attempt to kill in a fit of rage?

66. In Season 4, who helps Elena transition from a human to a vampire?

Matt allows her to feed off of him

67. What is Katherine Pierce’s real name?

68. Shane was killed on the island, who pretended to be him?

70. Caroline is what to Josie and Lizzie?

71. Who did Damon try to kill in the hospital in season 4?

72. Why does Elena try to break up with Damon in Season 4?

She finds out she is sired to him

73. How is the Werewolf Curse triggered?

When a person with the werewolf gene kills another person

74. Bonnie’s mother had another child, what was their name?

There is only enough for one person and she feels guilty

76. Who said, “I’m supposed to be running three different prom committees right now and you keep phone stalking me!”?

77. Who disguised himself as a pizza delivery guy?

Noah disguised himself as the pizza delivery guy

78. Why does Elena burn down her house?

To cover up Jeremy’s death

79. What do you see on Caroline Forbes’ wrist in almost all episodes?

80. Harper was a friendly vampire who got turned by who?

81. What does Klaus give Caroline as a graduation present?

82. While Vicki is in the hospital recovering from Damon attacking her, what does she throw at Matt to wake him?

83. Who was the lady wolf who slept with Klaus in season 4?

84. In Season 5, what college does Elena, Bonnie, and Caroline attend?

85. When Damon kidnapped Elena in the episode “Bloodlines” after he pulled her out of a car wreck, where did he take her?

86. In the season 1 finale, Damon found someone unexpected. Who was it?

87. In Season 5, why does Bonnie struggle at school?

She is an anchor to The Other Side.

88. It cannot be argued that Klaus has a talent for killing, maiming, and evil. However, he has a more cultural outlet; what is it?

90. In Season 5, where was Elena during the three weeks she can’t remember?

91. The Lockwood family has occupied an important position in Mystic Falls since its founding. What is it?

92. The oldest son of the Mikaelson’s was in love with who?

93. What’s the last thing Damon says to Elena before he dies?

“You are by far the greatest thing that’s ever happened to me in my 173 years on this earth.”

94. What does Bonnie think will happen to Florida?

It will break off and turn into little resort islands

95. In the third season, how does Matt connect to Vicki’s ghost?

96. Who does Valerie have a child with when visiting Mystic Falls?

97. What powers does Elena’s necklace possess?

98. Why was everyone fighting over the Phoenix Stone?

There were multiple dead vampire souls trapped inside of it.

99. When did Stefan first encounter Elena?

100. When were Klaus and Stefan friends?

101. What does it mean that Bonnie sees Elena in bed in the woods?

103. Why did Elena slap Damon for the first time?

He tried to kiss her

104. What does Matt ringing the bell eleven times allow to happen?

Cade is able to come to Mystic Falls

105. In which year does the first season of The Vampire Diaries release?

106. Damon was poisoned with vervain by Stefan, by what means did this happen?

He spiked Caroline’s drink with vervain.

108. How many seasons are there in The Vampire Diaries?

Because he didn’t finish his transition.

110. In the pilot, Stefan returns home and finds his older brother Damon who he hasn’t seen in how many years?

112. What was the age of Stefan when he became a Vampire?

She loved him and his blood turned her

115. Name the town in which The Vampire Diaries is located?

116. When did Elena and Stefan originally cross paths for the very first time?

117. Why didn’t Rebekah kill Esther when she returned in season 3?

Because she was dying

118. How did Alaric turn into a Vampire?

Esther turned him into a vampire.

119. Which original vampire helped his mother to try to kill all of the originals?

120. What happens to Abby after Bonnie finds her?

Turned into a vampire

122. On how many occasions has Caroline Forbes kissed Klaus Mikaelson by the episode “After School Special”?

His ring is to blame

124. In high school, Elena’s birth mother Isobel has a best friend. What is her first and last name?

125. Logan use to babysit Caroline, but why would he harm her?

To threaten her mother.

126. Bonnie started college later than the other girls, why’s that?

127. Where does Meredith Fell work?

128. When was the cemetery established?

130. What episode was Damon and Elena’s first kiss?

131. What is the main reason that Stefan was attracted to Elena?

132. In what episode does Elena figure out she looks like Katherine?

133. What episode did Kai and Luke merge?

“Prayer for the dying”

134. What is the thing that protects Stefan and Damon from the sun?

Because of the rings they have.

135. What kind of creature was Bonnie?

136. What song was playing at the ‘Miss Mystic Falls’ pageant?

137. What is the number od Damon’s Augustine?