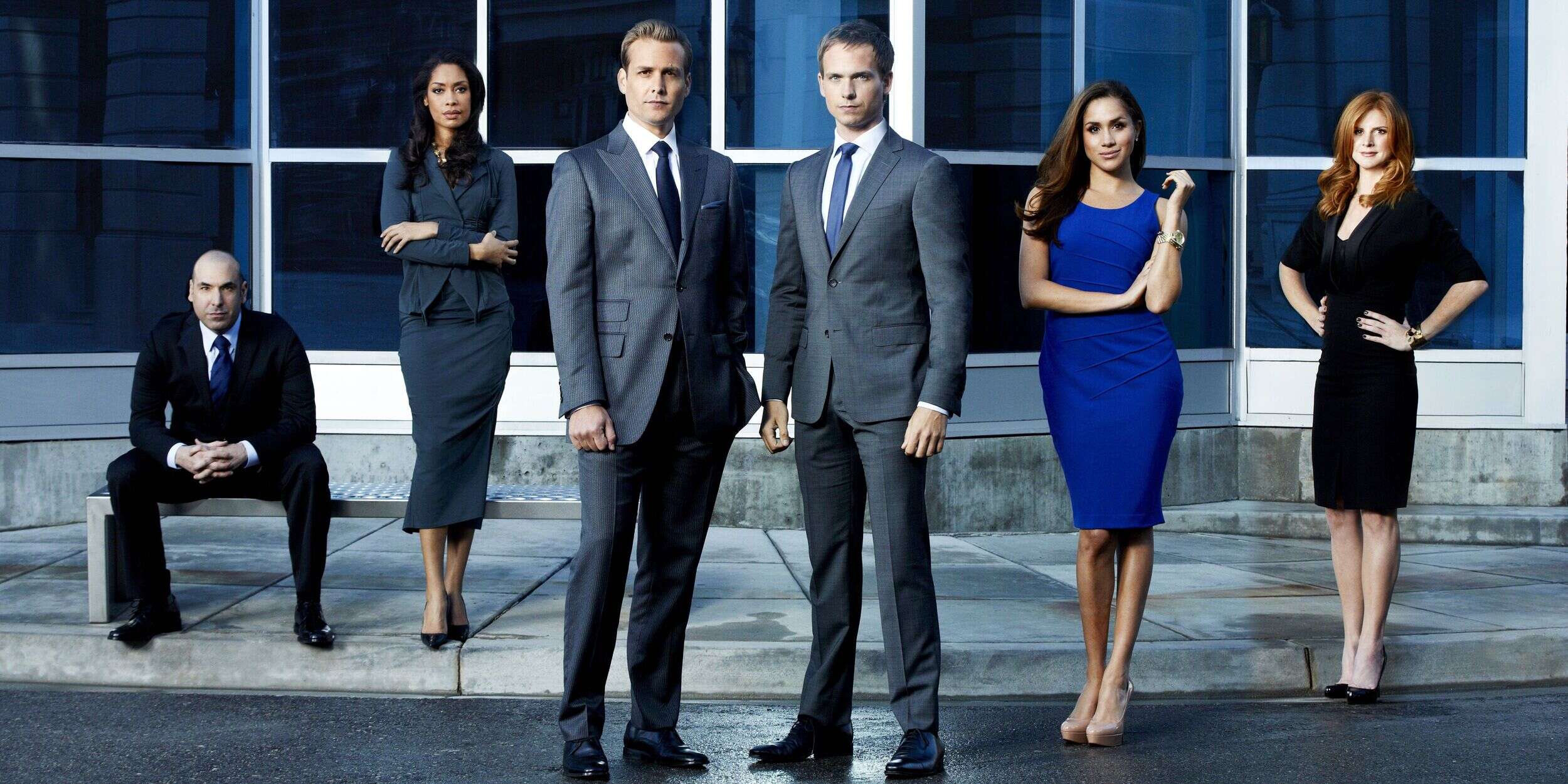 Suits, a sizzling legal drama movie series, debuted in the previous decade. Across its nine seasons, Suits is an epitome of a slick network drama that settles for being generically re-watchable. The impeccably-cast ensemble, altogether with the top-notch script, made the story unmatched.

The series is set at a fictional New York City law firm. On the run from a drug deal gone south, brilliant college dropout Mike Ross slips into a job interview with Harvey Specter, a remarkable lawyer from New York. Upon discovering his photographic memory and raw talent, Mike Ross lands a job with Harvey.

If you think you know everything there is to know about Harvey Specter (Gabriel Macht), Mike Ross (Patrick J. Adams), and everyone in their sphere of influence, now’s the time to prove it for the ultimate bragging rights.

Below is a series of questions to test how well you have mastered 134 episodes of Suits -TV’s most nuanced legal drama.

1. Who is Harvey’s main rival in the series?

2. At the end of Suits Season 3, who does Mike leave Pearson Specter to work for instead?

3. One of the countries where the series was filmed?

4. Harvey and Donna have a secret ritual involving a what?

5. What was the name of the shady billionaire investor in the series?

6. What is Harvey Specter’s middle name?

7. What kind of genre is Suits TV series?

8. At the beginning of the series, why does Mike agree to deliver the briefcase for Trevor?

He needs money to pay for his grandmother’s nursing home care.

9. Who is the college dropout in the series?

10. Where did Rachel earn her law degree?

13. Who was Harvey Adams’ personal associate?

The Order of the Coif

15. The series was filmed in how many countries?

16. What gift does Donna give Louis as an office-warming gift in Season 4?

A photo of her as Ophelia

17. Who was the unlicensed genius’s associate in the series?

19. How many episodes does the second season have?

20. Who sends the tip to the U.S. Attorney’s office that Mike is a fraud?

22. Before he worked at Pearson Hardman, Harvey had a job where?

23. Pearson Hardman only hires associates who graduated from…?

24. Why does Jessica fire Donna in Season 2?

Because Donna destroyed an important memo.

25. Which sporting legend is one of Harvey’s clients?

26. In which legal field does Harvey practice?

He doesn’t have a law degree

29. Who is the female shark in charge of the Suit law firm?

30. What Is Rachel Zane’s Job At The Start Of The Series?

31. Who lands an interview with Harvey Specter after he runs from a drug deal gone bad?

32. What Is Special About Louis’ Catchphrase “You Just Got Litt Up!”?

36. Which brand of a suit does Harvey wear?

38. How much money does Trevor offer Mike to deliver the suitcase of marijuana?

43. Which movie inspired Louis to vacation in Bangladesh?

45. What is Harvey’s favorite drink?

48. After working 12 years for Harvey, Donna briefly goes to work for?

50. What is Louis’s catchphrase?

You just got Litt up

51. Which type of woman does Harvey refuse to sleep with?

52. Whose ashes does Louis have in his office?

58. Who is the senior SEC official that Harvey butts heads with on more than one occasion?

59. Harvey threatened to tell who about the affair?

60. Five years before the events in the series, who embezzled money from the firm?

61. Who was named the successor when Daniel threatened to resign?

62. How did the firm get Daniel to resign?

63. Who is the father of Rachel Zane?

64. Whose father is named partner in a competing firm?

65. When the series first starts, ______ is a marijuana dealer and a computer programmer of dubious skill?

67. Rachel’s father, Robert Zane, is a name partner at?

68. What exam did Mike charge to take for others?

69. Where did Katrina Bennett work before joining Pearson Specter Litt?

70. Who was Mike’s best friend and the drug dealer that sent him on the deal that went bad?

71. What made Daniel a changed man?

Death of his wife

73. Gretchen is originally hired as Harvey’s executive assistant when ___ is working for Louis?

74. What does Louis do when he is stressed?

76. When Mike’s arrested for not being a lawyer, he is charged with?

77. Who helps Mike to get out of prison earlier than his sentence?

79. Why does Louis fire Donna?

So that she can go back to Harvey

80. Who is the inmate that gives Mike a rough time in prison?

82. After Donna goes back to Harvey, what quick-taking experienced assistant does Louis get?

85. Harvey put away Frank for racketeering even though he should have been put away for?

88. __________ holds the fact that he knows Mike is a fraud over Jessica’s head? He exchanged his silence for his name-partner status.

89. Which celebrity is part of Harvey’s client roster?

90. Where did Michael and Rachel kiss for the first time?

91. Which company is part of Daniel Hardman’s intrigue against Harvey?

93. Who is the first person to tell Mike about his grandmother’s passing?

94. Which law firm does Allison Holt work for?

96. What car does Stephen Huntley drive?

99. Who was Harvey’s previous mentor at the DA’s office?

100. What position does Nigel Nesbitt hold in Darby International?

102. Which company does Tony Gianopolous want to take over?

103. What’s Monica Eton’s excuse for leaving the office every Tuesday to secretly meet with Daniel Hardman?

104. What profession is Harvey’s dad?

105. Who is asked to take the role of Travis Tanner in a mock trial in preparation for a lawsuit case against Pearson Specter Litt?

106. Who is Mike’s previous affair before Rachel?

107. What disease did Jessica’s ex-husband try to develop new medication for?

108. Who temporarily replaced Donna after she was fired?

109. Where does Rachel apply to law school behind Mike’s back?

110. Who is the first person to tell Jessica Pearson the truth about Mike?

112. What quality is most important to Harvey?

113. How much money is in Mike’s suitcase when he gets interviewed by Harvey?

117. Mike Ross was hired as an associate lawyer by Harvey Specter after he accidentally gate-crashed an interview whilst on the run with a briefcase full of drugs in season 1 of “Suits”. Harvey knew of Mike’s lack of legal qualification right from the start, but who else knew from the day he was hired?

118. Where did Harvey Specter work before he became an associate at Pearson Hardman?

119. Whose father is named partner at a rival law firm to that at which they work?

120. Which partner loves mudding and has a cat named Bruno?

121. Jessica Pearson and Daniel Hardman ousted three named partners in order to create Pearson Hardman. What was the firm called before the ousting?

122. Which English lawyer described Donna Paulsen as having “a body like Elizabeth Hurley and the sass of a Maggie Thatcher” in season 3?

125. When Jessica agrees not to take back Harvey’s promotion to Senior Partner, what does he have to agree to do?

Take on a pro-bono case

126. When having dinner with Jessica, Harvey makes a pass at a waitress who tells him she’s not interested. What is her name?

127. What is the name of the person that Louis Litt fires when Mike is in his office?

128. For most of the episode, Mike Ross carries a briefcase around with him. What is inside the briefcase?

129. When Mike and Rachel spend the night researching, what food does Rachel want to order?

130. When Trevor meets with the drug suppliers, what game are they playing?

131. After deciding to stay with the firm, Mike returns the briefcase to Trevor. Before opening the case and showing Jenny that Trevor is dealing drugs, Mike takes something belonging to Trevor. What does he take?

133. What is the name of the witness who Mike persuades to testify?

134. Who is the third person to learn of Mike’s secret?

135. What exam did Mike charge a fee to take for other aspiring lawyers?

136. When Harvey hires Mike as his associate, what secret are they hiding from the rest of the law firm?

Mike is not a lawyer

137.  At the beginning of the first season Mike needs to make a lot of extra money, but why ?

138. Rachel Zane is the firm’s longest-serving what?

139. Which lawyer directly oversees all associates at the firm?

140. Who is the managing partner in the law firm Pearson Hardman?

141. What kind of cat Donna’s grandmother has?

142. What was Rachel’s final LSAT score?

147. Whose attorney is Harvey Specter?

148. What does Harvey whisper when Louis hugs him after recovering from a heart attack?

149. What is Mike’s grandmother called?