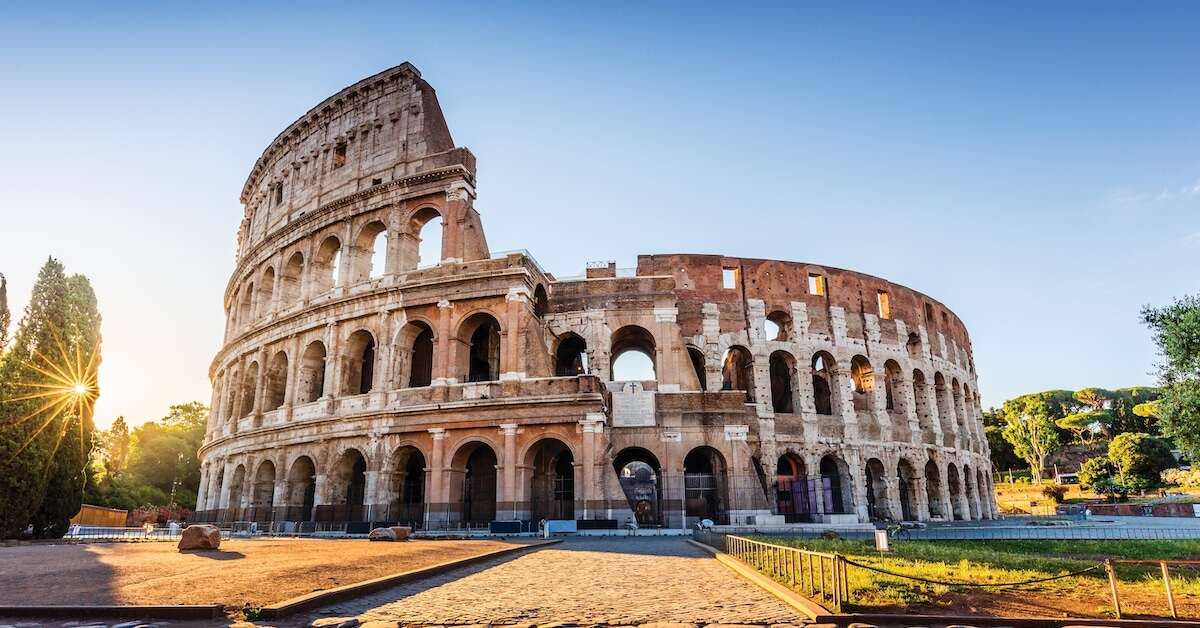 Italy borders Austria, France, Vatican City, San Marino, Slovenia, and Switzerland. It is slightly larger than Arizona. The country has the oldest population in Europe. It is estimated that the average age in Italy will be 54 years by 2050.

Shakespeare’s “Romeo and Juliet” was set in Verona and you can actually visit “Juliet’s balcony” in the city. As much as Shakespeare is accurate about Italy, there’s no proof he ever visited the country.

It is a tradition in Italy to eat salad after the main course as fiber helps with digestion. However, it’s not taken as a dessert. After the salad, you can still look forward to fruit and a dessert of your choice.

The country is famous for its many inventions. For instance, corrective eyeglasses, thermometers, batteries, and Ice cream cones are Italian inventions.

Quiz yourself with this list of Italy trivia questions and answers to help you understand more about the country and its people.

1. What is the capital of Italy?

2. What type of footwear is Italy said to look like?

3. What colours can you find on the Italian flag?

4. Which contemporary Italian sculptor, famous for his bronze spheres, is named after a fruit?

6. What is the population of Italy?

7. Which currency is used in Italy?

8. What was the nickname of the composer of Le Quattro Stagioni?

9. In what year did Italy become its own country?

10. In which century was the Italian Unification?

11. Which Italian car manufacturer sponsors a Formula One team?

13. Which is the longest river in Italy?

14. William Shakesphere wrote 38 plays; how many of them were set in Italy?

15. What is the official name of Italy?

17. How many active volcanoes are there in Italy?

18. Which countries share a land border with Italy (not counting the enclaves)?

19. Literacy rate of Italians is what?

21. Two countries are enclaves in Italy. Which ones are they?

22. What was the name of the town destroyed by mount Vesuvius in 79AD?

23. How many official languages are there in Italy?

24. Which is the highest mountain in Italy?

25. What product is Italy the largest producer and exporter of?

Wine, producing around 54,800 hectolitres per year!

26. When was Pompeii destroyed by the ashes of Mount Vesuvius?

27. What is the name of the church in the Vatican?

28. How long would a flight from NYC airport take to Italy’s capital city?

29. What is the longest river in Italy?

30. What is the name of the mountain range that forms the dorsal spine of Italy?

The Alps and the Apennines

32. Rome has only one sister city. Which was is it?

33. Which is the largest of the Italian lakes?

34. Florence Nightingale was born in Italy on 12 May; of what year?

35. In which Italian city is “Romeo and Juliet” (Shakespeare) set?

37. Which town is part of the Amalfi Coast?

38. Who painted the ceiling of the Sistine Chapel?

39. In what Italian city was pizza invented?

40. On which Italian island can you find the town of Alghero?

42. What percentage of Italians identify as Christians?

43. What is the capital of Sicily?

44. Which range of mountains can you find at the border between Italy and France?

45. Christopher Columbus was born in which Italian port?

46. In Roman Mythology, what are the twins’ names who discovered the city of Rome?

47. What is the capital of Puglia?

50. Which UNESCO site is made of 18 peaks and located in the northern Italian Alps?

51. Which famous Roman was assassinated on the ‘Ides of March’?

52. Which region is Naples the capital of?

53. Who was an Italian scientist and artist who was the first to prove the world is round and not flat?

55. Which UNESCO site is made of 5 seaside villages in Northern Italy?

56. Which is a Lagoon City build on islands and known for its Carnival?

57. In what year did Rome become a kingdom?

58. Which river flows through Rome?

61. On which small island can you find the Spiaggia dei Conigli?

62. Which world-famous astronomer was sentenced to life in prison, in 1633, for opposing the Churches teachings with scientific fact?

63. Who was the first emperor of Rome?

64. Italy was established in which year?

65. In what year did Italy adopt the euro as its official currency?

66. Lorenzo de Medici was the de facto ruler of which republic?

67. How many minority languages are also spoken in Italy, including German, Sardinian, Slovene and Albanian?

68. If someone said ‘Addio,’ what would they mean?

71. Italian is the closest national language to what?

72. Which Italian noblewoman became Queen of France in the 16th century?

73. Population of Ukraine is more than that of Italy. True/False?

74. How many English-speaking people are actively learning to speak Italian on the language-learning website Duolingo?

77. How many letters are in the Italian alphabet?

Have a nice day!

80. What course would you expect to be served a salad in Italy?

Side dish! Served next to Secondi Piatti (the Main)!

82. How many different types of pasta are there?

83. What is the name of the typical Sicilian dish made of a stuffed rice ball?

84. What thought of Italian dish is not Italian at all?

85. What type of milk is used to make traditional mozzarella?

86. What food is traditionally eaten in Italy on New Year’s Eve?

87. Which cut of meat is used in an Osso Bucco?

88. What is the national dish of Italy?

89. In which city was the Pasta Carbonara invented?

90. When did the first pizzeria open up in America?

91. What type of food is Focaccia?

92. Famous Italian dessert, Tiramisu, typically contains liquor; but which 2 are the most popular additions?

93. Which Italian dessert can be translated as “lift me up”?

94. What is the main ingredient in the pasta known as Gnocchi?

95. What is the main ingredient in the sauce of a Risotto ai Funghi?

96. What does Italy have more of than any other country?

World Heritage Sites; of which there are 55!

97. To which cheese family does Parmigiano belong?

98. How many Italians work as Baristas in Italy?

99. Which dish consists of slices of raw beef sprinkled with oil and Parmesan cheese?

100. On average, how many cups of coffee are sold in Italian coffee shops every day?

101. Who painted the frescoes on the ceiling of the Sistine Chapel?

102. What does Italy have more of than any other country?

World Heritage Sites; of which there are 55!

103. Which famous statue can you find at Florence’s Galleria dell’Accademia?

104. How many Italians work as Baristas in Italy?

105. In which museum can you find “The Birth of Venus” by Sandro Botticelli?

108. How many people visit Italy every year?

109. Which famous painting from Botticelli can be translated from Italian to “Spring”?

110. How much money annually do tourists throw into the Trevi Fountain?

112. Which famous Italian sculptor made The Feast of Herod and Lo Zuccone?

113. In which city can you find the Uffizi Gallery?

114. Which family was the mentor of Michelangelo?

120. Which theatre in Milan is known in the entire world for its operas, ballets, and concerts?

121. What is the Italian term that describes the fact of singing without instrumental accompaniment?

122. What is the national anthem of Italy?

124. How many times did Italy win the football world cup?

125. Which Argentinian football player used to play for Napoli in the 80s?

126. What are the two main football teams in Rome?

SS Lazio and AS Roma

127. In which Italian city where the 2006 Winter Olympics hosted?

128. In which city is the Italian Open held?

129. Italy is part of a European Rugby competition. Which one is it?

131. Which sport is Valentina Marchei known for?

132. Which constructor got the most win at the Italian Grand Prix?

133. After which author is the term “Machiavellian”?

135. Which poet wrote the Divine Comedy?

Under the Tuscan sun

138. In which famous movie can you see Anita Ekberg in the Trevi Fountain?

139. Which movie starred Audrey Hepburn and Gregory Peck in Italy?

140. Which movie, a sequel to The Da Vinci Code, was partially filmed in Rome?

142. Who plays Dickie Greenleaf in The Talented Mr. Ripley?

145. Who played Michael Corleone in The Godfather?

146. What is the English equivalent of “In bocca al lupo”?

154. Which letter is used at the end of a feminine word?

156. In which city can you find the Rialto Bridge (Ponte di Rialto)?

157. According to UNESCO, 30% of the world’s most important works of art can be found in one Italian city. Which city is it?

158. What sort of tower is the leaning tower of Pisa?

Campanile of the cathedral of Pisa

159. On which island can you find the Blue Grotto?

160. In which city can you find the Galleria Vittorio Emanuele II?

161. What is the name of the train that goes from Naples to Sorrento, through Pompeii?

162. In which archipelago can you find the pink beach of Budelli?

163. On which island can you find the Star of the Turks (Scala dei Turchi)?

164. In which Italian region can you find the Trulli houses?