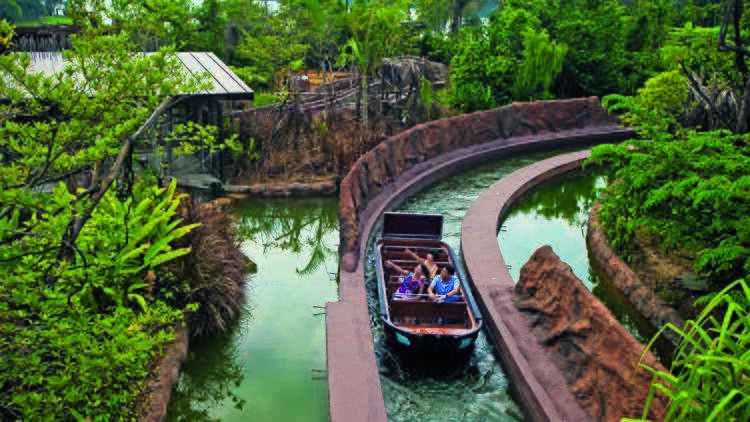 Singapore has long evolved to be a prosperous country. It’s a financial epicenter, with immense achievements in urban planning, and now serves as an economic model for developing countries.

For wildlife enthusiasts, Singapore is the place to be. You get to experience the world’s very first night zoo. The Night Safari features over 1,000 animals in their natural environment.

Beyond the bustling cities and islands to die for, there are numerous green spaces. For instance, the nature adventure at PARKROYAL – a hotel-in-a-garden.

You can find fun new things to do while in Singapore. The country holds frequent cultural festivals, major sports, and art events to keep you entertained.

Quiz yourself with this list of Singapore trivia questions and answers, sure to help you broadly understand the country.

1. You want to get to Sentosa. Which train station should you stop at?

2. What was Singapore known as during the 14th century?

3. When did Singapore become independent?

4. All male citizens and permanent residents must serve as a full-time National Serviceman (NSF) for two years before ORD. What does ORD stand for?

5. What are the colors of the Singaporean flag?

6. Which country is to the north of Singapore?

8. The name “Singapore” is derived from Sanskrit. What is the meaning?

9. Which is the capital of Singapore?

10. On which date did Singapore introduce a Goods and Service tax (GST) to increase the strength of its economy?

11. Which is the currency of Singapore?

13. At the coffee shop, you’re about to order Iced Black Coffee with Less Sugar. What should you say?

14. Which country is Singapore the closest to?

15. When did Thomas Stamford Raffles land in Singapore?

16. The National Physical Fitness Award (NAPFA) test is a compulsory fitness test all Singaporeans go through in primary and secondary school. How many test stations are there?

17. What is the name of Singapore’s international airport?

18. When did Singapore become a crown colony?

19. It was part of our daily routine to sing the national anthem during morning assembly back in school. How many of us actually know the correct lyrics?

20. What is the highest point on the island of Singapore?

21. What is the symbolism of the crescent on Singapore’s flag?

Growth of a young country

22. Here’s a playground rhyme that’s sure to bring back memories. It’ll sound like utter nonsense to foreigners, but Singaporeans know what’s up. What is it?

23. What is the official language of business and administration in Singapore?

24. Who was Singapore’s first prime minister?

25. Which Singlish word is used to describe competitiveness?

26. What day did Singapore gain its independence?

27. Who founded the first British colony in Singapore?

28. What is the maximum height of skyscrapers allowed in Singapore?

29. When do Singaporeans get to watch the NDP rehearsal for free with their classmates?

30. What is the currency of Singapore?

31. What language is the medium of instruction in Singaporean schools?

32. Joseph Schooling made history by clinching Singapore’s first-ever Olympic gold in Rio 2016 for the 100m butterfly. Which brand is Schooling NOT an ambassador of?

33. NS5 is the alpha-numeric code for MRT Stations. What is the name of the MRT Station?

34. Who was the first elected president of Singapore?

35. What color is the North-East Line on the MRT map?

36. If you are in Singapore and you decide to ‘go across the causeway’, what are you planning to do?

37. Who is the winner of the first Singapore Idol?

38. Which university is ranked first in the whole of Singapore?

39. What is the name of the famous street that runs through Singapore’s main commercial district?

40. A lot of Singaporeans live in HDB flats. What does the HDB stand for?

Housing and Development Board

41. Which films were directed by Jack Neo?

I Not Stupid, Money No Enough, Ah Boys to Men, and Homerun

42. Singapore’s most popular tourist attraction is an island that is completely covered in amusement parks and museums. What is the name of this island?

43. What is the name of the official residence of the President of the Republic of Singapore?

44. What is the name of the bridge that spans the mouth of the Singapore River?

45. In 2000, there was a fight that resulted in property damage and seven injured. What was the cause of the riot?

46. From February 1942 to September 1945, Singapore remained under the control of which nation?

47. Country erasers are a childhood favorite for many Singaporeans. How is it meant to be played?

48. To which imaginary lines are Singapore’s location nearest?

49. What nickname has the city unofficially been referred to since the 1980s?

51. Old Chang Kee is best known for what type of snack?

52. When was modern Singapore founded?

53. The coldest temperature ever recorded in Singapore was?

54. How long is the term of Singapore’s president?

55. When President Obama visited Singapore in 2016, what local dish did he reference in his introductory remarks?

Rojak. (Obama was referring to Singapore’s mix of races, religions and creeds.)

56. What Singlish word refers to the practice of claiming a table at a food center by leaving a packet of tissues on a table?

57. Which island just off Singapore’s coast is said to have been formed by an elephant and a pig turning to stone?

The words of the national anthem

59. What Singapore attraction was renovated in 2008 – at great expense – after feng shui experts deemed it was moving in an unlucky direction?

60. If you stretched all of Singapore’s roads end to end, where would they reach?

61. What MRT stations have the anagrams Trauma Pork, Gender Kit and Siri Raps?

63. What tasty-sounding road is Singapore’s longest?

64. Approximately how many high-rise buildings does Singapore have?

67. What is Singapore’s biggest export?

69. Which ingredient is not found in a traditional Singapore Sling cocktail?

Vodka. The Singapore Sling is a gin-based cocktail.

70. What 2018 Disney/Marvel blockbuster has already become the highest-grossing film in Singapore’s box-office history?