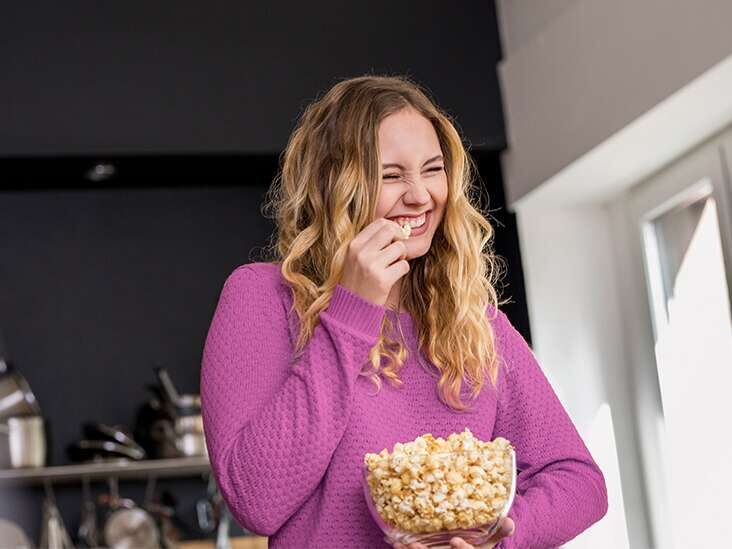 Popcorn jokes are among the most popular food jokes. These jokes pop up often when you are sitting on the couch with a bag of popcorn enjoying your favorite movie shows.

If you’re a foodie or you just enjoy tasty popcorn, this great collection of corny popcorn jokes will have you laughing out loud.

This funny collection of jokes, fun riddles, and puns about popcorn is suitable for adults and kids. Anyone can freely participate and enjoy the good times.

These popcorn jokes can reveal the comic side of people and get them in a good mood. Who wouldn’t want to read a popcorn joke that reminds them of making tasty popcorn?

Here is a great collection of corny and delicious popcorn jokes, you should share with loved ones.

1. What did the baby corn say to its mom?

Where is pop corn?

2. What do baby corns call their daddy?

3. Why do balloons hate kernels?

4. What’s the difference between popcorn and pea soup?

Anyone can pop corn, but you can’t pee soup.

5. Why did the kernel turn into a popcorn one fine day?

Because it was a hot day.

6. What do you call a field of passion, popcorn?

7. What do you call a popcorn’s favorite flower?

8. What happened to the corn that went to join the force?

He became a Kernel.

10. What do you call the Children of the Corn’s father?

11. What do kernels do in their free time?

12. Why didn’t the kernel leave the popper?

13. What did a kernel say to another kernel to express his love?

14. Why would a miser tape a bunch of kernels to his ceiling?

Because he could not afford fire alarms.

15. Why is popcorn way better than a movie?

Because they are just so much butter.

16. What is corn’s favorite music?

17. What happened when I accidentally stepped on a kernel?

I became a cereal killer

Nah, it’s to corny. Oops! That popped out of nowhere.

19. What is a popcorn’s favorite pizza topping?

Because the corn has ears!

22. What do kernels do to lose weight?

23. What did one ear of corn say to the other traveling down the highway?

24. Why do all the corns hate the kernel?

Because he always bosses around.

25. Why did the corn cob cross the road?

To see his favorite band the “The Poppers”.

26. Who is the leader of the popcorn?

27. Why did one of the five kernels not pop?

He was wearing sunscreen.

28. What did the kernel say to his girlfriend after movies?

“I hope you are having a grain time.”

29. Why did everyone believe the corn’s story?

Because there was a kernel of truth to it.

30. What is the main ingredient for cooking popcorn?

31. What is a kernel’s favorite type of candy?

32. Why aren’t there many jokes about popcorn?

Because they are corny

33. What did everyone say to the kernel when he finally popped?

34. Why did the police officer arrest the popcorn?

It was guilty of all salt and buttery.

35. What happened when the kernel decided to change its career path?

He was in a different field.

36. I called AMC customer service to ask if I could use popcorn vouchers to cover a margin call.

The short answer is no.

38. What’s the highest rank in the popcorn army?

Because she just won the corntest.

40. What does kfc use to make its popcorn chicken?

41. Why was the popcorn picking up a fight with everyone?

Because he was salty.

42. Right before I die, i’m going to swallow a bag of popcorn kernels.

My cremation is going to be epic.

43. What would a gymnast popcorn be famous for?

And I realized that there isn’t any popcorn in it. There goes pot roast.

45. What kind of jokes would cheddar popcorn make?

46. What do you call one piece of popcorn?

47. It’s awkward touching hands with a woman in a popcorn bag.

Especially if you don’t know her and she doesn’t know that you’re eating her popcorn.

48. What comes free with popcorn?

49. Why could the popcorn not watch the movie?

Because he was over even before the movie started.

50. I got fined $50 for sneaking popcorn and a drink into the movie theater.

It’s ok though, it still saved me money.

52. “My date hasn’t arrived yet, but I would like to buy her a bag of popcorn,” I told the cinema assistant.

“Small, medium or large?” he asked.

53. Why could someone not enjoy the popcorn they sneak into the theater?

Because there are no microwaves.

54. What do emos and unsalted popcorn have in common?

They’re both white and flavorless

55. I wonder if the first person to pop popcorn suddenly had the urge to…

56. Who is popcorn’s favorite character?

57. I tried sharing a bag of popcorn with a homeless guy recently

He told me to screw off and buy my own

59. Why did the popcorn cross the road?

Because Popper was performing on the other side.

60. Why don’t zombies eat popcorn with their fingers?

They prefer to eat their fingers separately.

61. What happened to the lady who had to pay a fine for smuggling popcorn in the theaters?

She paid more than what she would have to buy popcorn at the theaters.

62. What does Linus Torvalds get when he drops his popcorn?

63. Why does popcorn have such great visual power?

64. This Valentine’s Day, 1 in 3 people will be crying into a bag of popcorn while watching Netflix alone.

Not me, though. I can’t afford a subscription.

65. What happened to my brother who ate the expired popcorn?

66. I’ve got a great recipe for popcorn stuffed duck.

67. How does a popcorn taste past its expiry date?

68. The Popcorn Army is very similar to most other armies.

The main difference is the ranking system: everyone starts out as a Kernel.

69. What did mama corn say to the baby corn?

“Stop popping around with your friends all day”.

70. I tape microwave popcorn to the ceiling cause?

It’s cheaper than a smoke alarm.

71. How much does pirate corn cost?

72. What do you call buying a huge amount of corn at once?

73. What kind of corn likes to eat meat?

74. What do corns play with during their free time?

75. Why could the corn not go to school?

Because he was in the can

76. What happened when I swallowed an entire corn cob?

I was corn-stipated for days.

Because he always cracks a corny joke.

78. How was the baby corn I met yesterday?

79. How does a corn generally smile when they hear a corny joke?

From one ear to the next.