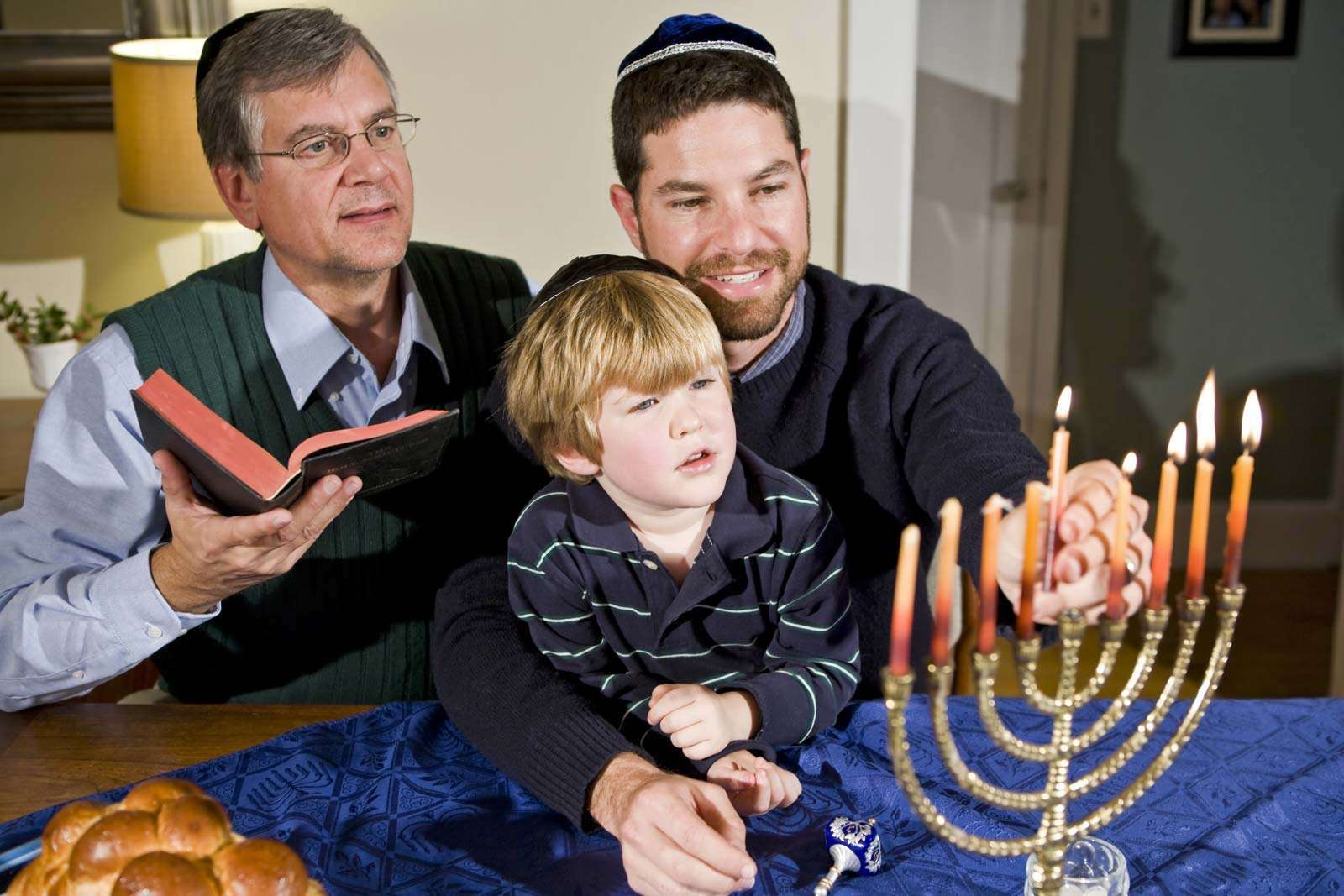 Ever heard of the Hanukkah festival?

Hanukkah is a Jewish holiday that lasts up to 8 days & nights. It is traditionally celebrated with the lighting of candles, sharing delicious food, and a perfect moment for families to bond.

Did you know that historically, Jews did not give gifts during Hanukkah? Unbelievable, right?

Are you aware that Hanukkah and thanksgiving day have coincided four times between the years 1863 and 2013?  If you just learned that right now, how about you read more fascinating things about Hanukkah?

We bet that this fun trivia quiz will fill you with interesting facts about the Hanukkah festival. Test yourself with our well-researched Hanukkah trivia questions and answers, sure to expand your know-how.

1. What is Hanukkah also called?

The Festival of Lights or The Feast Of Dedication.

2. According to the English lyrics of ‘The Dreidel Song’ which children sing at Hanukkah, out of what material is a dreidel made?

3. State the count of Matisyahu’s sons who fought Greeks?

4. For how many days is Hanukkah celebrated?

5. Outside of Israel, the four sides of a dreidel are inscribed with the letters Nun, Gimmel, Hey and Shin, mnemonics for the phrase ‘Nes Gadol Hayah Sham’, a reference to the origins of the Hanukkah celebrations. What is the usual translation of this phrase?

A great miracle happened there

6. What was the name of Matishyahu’s son?

7. State the count of players needed to play the dreidel game?

8. Where is the world’s largest Hanukkah menorah situated?

9. The best part of Jewish holidays is often the food! To celebrate the “miracle of oil”, fried potato pancakes are eaten in Hanukkah. What are these pancakes called?

10. Where does the word Hanukkah originate from?

11. A little history is needed to understand Chanukah. Which Greek king, known for almost conquering Egypt, oppressed Jews, leading them to revolt and start the history of this holiday?

12. To which other reason Maccabees are also known?

13. Apart from Hanukkah, what are the two other Jewish holidays?

14. The Jews wanted to revolt against the king, knowing that it was the only way for them to freely practice their religion. The revolution was led by Mattathias the Hasmonean and his famous son. Who is he?

15. Who was the first President to celebrate Hanukkah at the White House?

16. The dreidel game starts with each player placing the same number of playing pieces in the pot (pool or kitty, located in the center of play). While many different items can be used as playing pieces, by what name are they usually generically referred?

17. Name the modern-day country in which Greeks are based?

18. There are about sixteen ways to spell the word Hanukkah. True or false?

19. Known as “sufganiyot”, these delicious jelly doughnuts have become a Hanukkah tradition. By which of the following are sufganiyot known within the Yiddish?

20. On which day does Chanukah start every year?

21. Why is Judith known as the Heroine of The Torah?

Judith was a young Jewish widow who bravely killed the top General of the Assyrian army, Holofernes, and helped the Israeli army launch a surprise attack.

22. Even though modern gift-giving is a rather “Christmassy” tradition that has been adopted in other celebrations like Hannukah, the act of giving comes from a long time ago, since children were given “gelt” (money) on each of the nights of Hanukkah. Why was this?

To teach children about charity

23. State the count of lamps that Menorah has in the Temple?

It is the very first candle that is lit to light the other candles.

25. What were the Maccabees looking for in the Temple that they needed to use right away?

It means “helper”, as the Shamash is used to light the other eight candles.

27. When the dreidel comes to rest with the side marked with the letter Gimmel facing up, what playing action is required of the spinner?

Take everything in the pot

28. Which prayer is usually said during the lightening of Menorah?

29. A great miracle happened on the day of rededication. What was it?

30. To celebrate the miracle of the oil, it is important to cook with plenty of it. What is the main ingredient of latkes, which are traditionally eaten on Chanukah?

31. Name the round jelly doughnuts enjoyed especially during Chanukah?

32. When the dreidel lands with the letter Hey facing up, the spinner is to take half of the pieces in the pot. What happens when this is an odd number?

The player takes one-half a piece, more than half the total

33. Which two foods are traditionally linked with Chanukah miracle?

34. Traditionally, the women of the house must rest until the flame of the candle burns out. True or false?

35. Sufganiyot are delicious doughnuts eaten in Chanukah. They are deep-fried in oil, to remember the miracle Jews celebrate during this holiday. What is NOT a common ingredient used in sufganiyot?

36. Which type of oil is used for Menorah?

37. Who developed the modern-day chocolate gelt?

38. For how much time, Chanukah candles must be burned?

At least half an hour after night has fallen

39. The first chocolate gelt was produced in which decade?

40. When a player is required to add one or more pieces to the pot and does not have sufficient pieces in their reserve, what can they do to avoid leaving the game?

Ask another player for a loan

42. The holiday of Hanukkah lasts for eight days, and a candle is lit every day. This means that on the second night, you would not only light one candle but two. On the last night of the holiday, how many candles will be burning in the menorah?

43. What is the starting and ending date of Hanukah?

A dreidel is a spinning top with the Hebrew letters Nun, Gimel, Hey, and Shin inscribed on it.

45. In which direction do you light the menorah, once the candles have been placed?

46. State the count of blessings said when lighting Hanukah?

“A miracle happened there”

48. What traditional Hanukkah dish is the Jewish version of potato pancakes?

49. How do Afghan Jews celebrate this Jewish holiday?

Instead of lighting eight candles, they fill eight plates of olive oil and set them beside each other.

50. Who lit the first National Menorah in the White House lawn?

51. Where do the Algerians place their menorahs?

Algerians hang their menorahs on walls near their doorways

52. What are children encouraged to do on Hanukkah?

53. What do Australians do to celebrate this Jewish festival?

hey host large family gatherings and parties to light the candles, followed by a day of celebrations and festivities.

54. What is recited during eight of Hanukkah?

55. When was the first Hanukkah celebrated by Canadians?

56. Why the practice of consuming fried food is followed in Hanukkah?

In remembrance of Sacred Oil

57. How do Canadians celebrate Hanukkah?

58. Name the most famous song that children sing on Hannukkah?

I Have a Little Dreidel

59. What do Colombian Jews eat during this Jewish holiday?

60. Which fried sweet food is mostly consumed on Hannukkah?

61. In which part of the world is a double-decker menorah used?

In Alsace, a region in France.

62. What is the middle candle called on Menorah?

63. Why is the double-decker menorah used?

So that both the father and son can light a candle each day.

64. What is the Hanukkah menorah called?

65. What is the name of the festival hosted in Budapest during Hanukkah?

Quarter6Quarter7 is a festival with concerts and great food

66. Which Christmas celebrations were incorporated by Jews in the late 19th century?

67. How many times is the festival Quarter6Quarter7 held in Budapest?

68. Name the rabbinic work that has the story about the oil being burned for eight days miraculously?

69. Which oil is used by the Indian Jewish community to light the menorah?

70. In which times, Hanukkah song Ma’oz Tsur was composed?

71. How many years ago did a miracle occur and become a festival that people celebrate with the name of Hanukkah?

72. The Maccabees fought courageously against the elephants. Myth or Fact?

73. Why do we light just one candle of the menorah per night?

To mirror our increasing happiness over the course of the holiday

74. What are the colors used in Hanukkah celebrations?

75. Playing gambling games in Hanukkah is a tradition. Myth or Fact?

76. How many jelly donuts are consumed in Israel throughout Hanukkah?

77. Which prayer is recited on Hanukkah as an addition to the Amidah prayer, which was formalized in the late 1st century?

78. When should Hanukkah lights usually burn at least?

Half an hour after it gets dark.

79. What is the last day of Hanukkah known as?

80. What is the reason for using blue and white colors in Hanukkah?

Because of the Israeli flag color

81. What should you have to do if you cross the international dateline?

The agent fires a Chanukkiah at their home

82.  In which biblical book the menorah is first mentioned?

The book of Exodus

83. How tall is the world’s largest menorah?

It stands at 32 feet

84. Who made the world’s largest menorah?

85. Which president established the tradition of a White House Hanukkah party?

86. In 1993, which astronaut once celebrated Hanukkah in space?

87. How much weight does the world’s biggest menorah weigh?