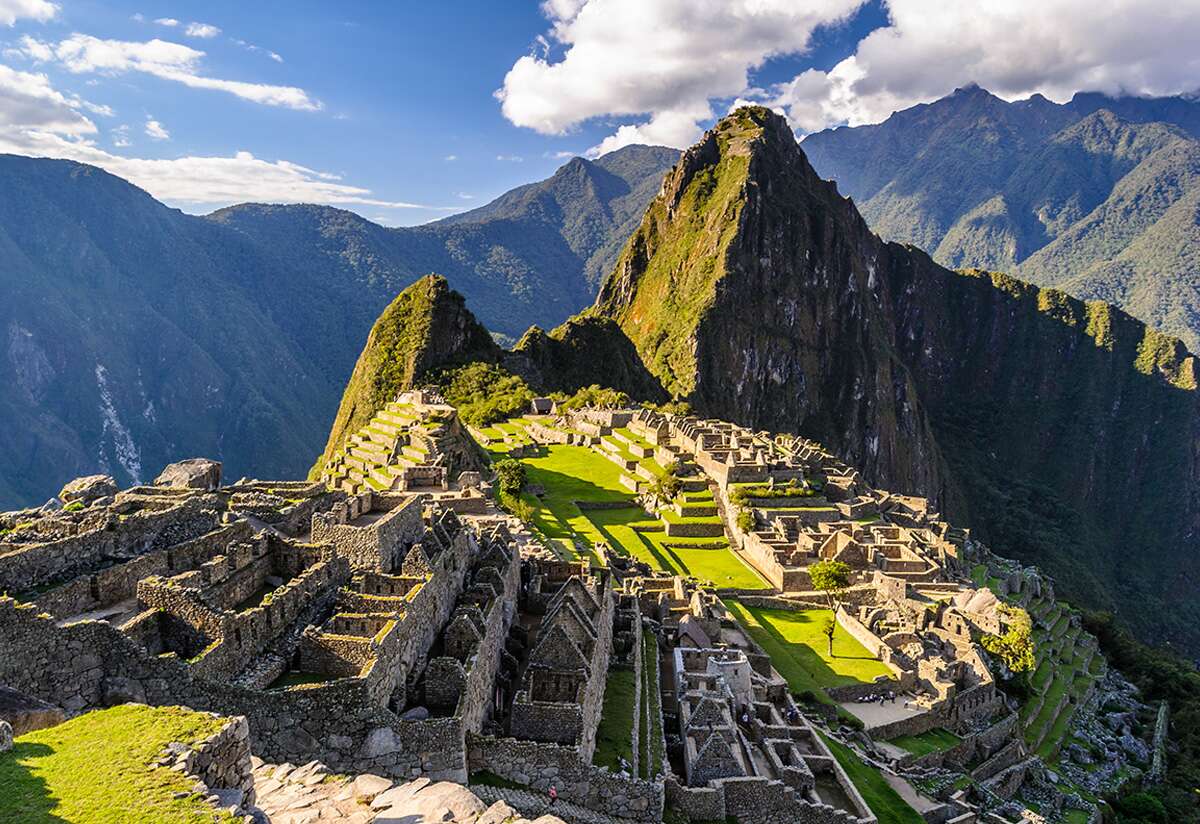 Ever heard the hilarious story of a lady who photoshopped herself at the Great Wall of China and luckily won a free trip to visit the incredible wonder of the world? Unbelievable, right?

Sometimes you got to do the unthinkable to get what you really yearn for. But let’s be honest here, all of us can’t be that lucky. You ought to break the bank to get the opportunity of witnessing the wonders of the world.

Here is something to console you folks, you can travel the world a page at a time by reading informative articles on the seven wonders of the world and literally anything out there.

So, what are the seven wonders of the world, and what do you need to know? This article will give you a clear understanding of the concept, necessary to expand your intellect.

What Are The Seven Wonders of The World?

We have compiled for you the following list and pieces of information about the seven wonders of the world that represents our global heritage. 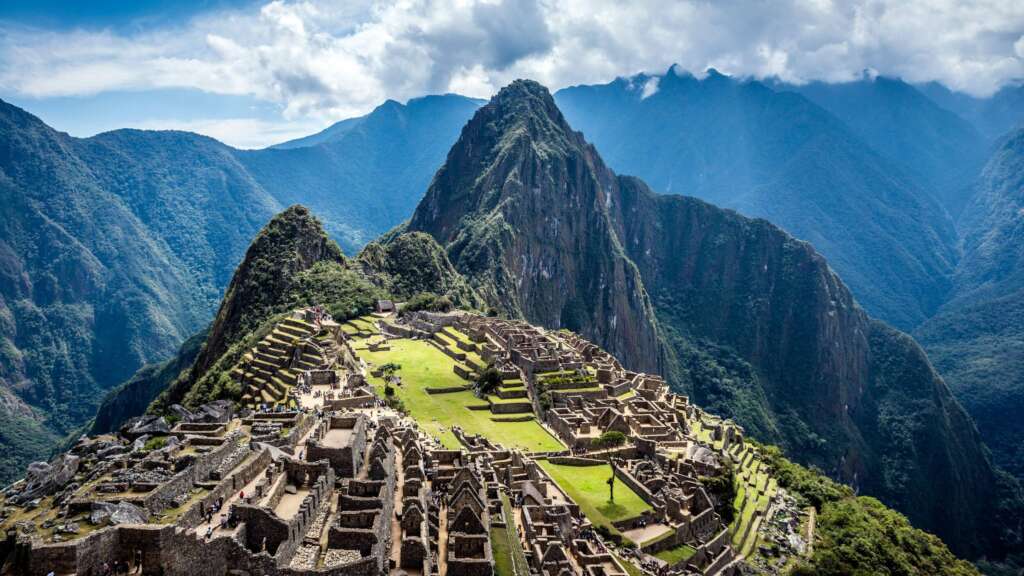 Derived from Quechua Indian language, Machu Picchu is loosely translated to mean “Old Mountain”. The site was rediscovered by the famous Yale Professor, Hiram Bingham, who documented his findings in a book titled: The Lost City of the Incas.

Since Peru is a seismically unstable Country, Machu Picchu was constructed atop two faults, so anytime an earthquake occurs the stones in the site are said to be “dancing” – they bounce through the tremors and then fall into place.

If you are conditioned to explanatory signs at the national parks and sanctuaries, then you’ll be surprised to learn that the Machu Picchu site provides no information about the ruins.

Unfortunately, the Spanish conquest destroyed cities built in Inca civilization but since the Machu Picchu was hidden it escaped the destruction making it a well-preserved archeological gem.

Should you visit the site, don’t just take snaps and leave. Walk through the end of the trail to find a ceremonial shrine of sorts that has been built into a cave, lined with exquisite stonework.

The Great Wall of China 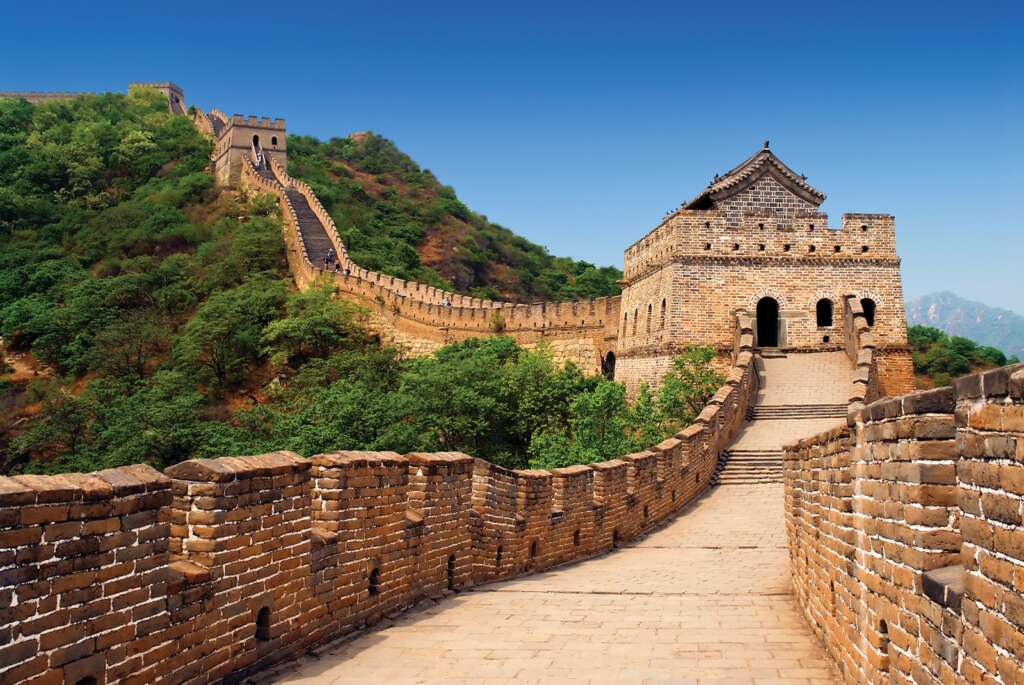 What was historically a huge line of military defense has now become a world heritage site. Known as the longest man-made structure on earth. Despite all the efforts in making the great wall the premier component of China’s military defense, it was not great at keeping off invading forces. Bummer!

Did you know that the Great Wall cannot be seen from space by the human eye without aid?

If you’ve been freaking out about visiting the site due to rumors suggesting there could be corpses buried there, worry not, for no bones have been found on the wall and there is no tangible evidence for the slander.

You may be wondering how comes the wall is still intact. The great wall owes its longevity to glutinous rice flour that sealed the bricks so tightly, making it impossible for weeds to grow between them.

According to statistics from UNESCO, nearly ⅓ of the walls have already disappeared. In fact, many wall sites are in danger of getting lost due to physical weathering and human activities. Very unfortunate, right?

You might be wondering which people contributed to the building of the site. The wall’s construction, maintenance, and surveillance were punishments for Chinese convicts. If you’re a believer of power in manifestation, you’ll be awed to learn that the construction of the Great Wall was predicted in an ancient Chinese poem known as “Shijing”.

Under the rule of Mao Zedong, in the late 1960s and early 1970s, some parts of the wall were stripped off bricks and used to rebuild civilian homes. Indeed, human vandalism is the biggest threat to the wall! 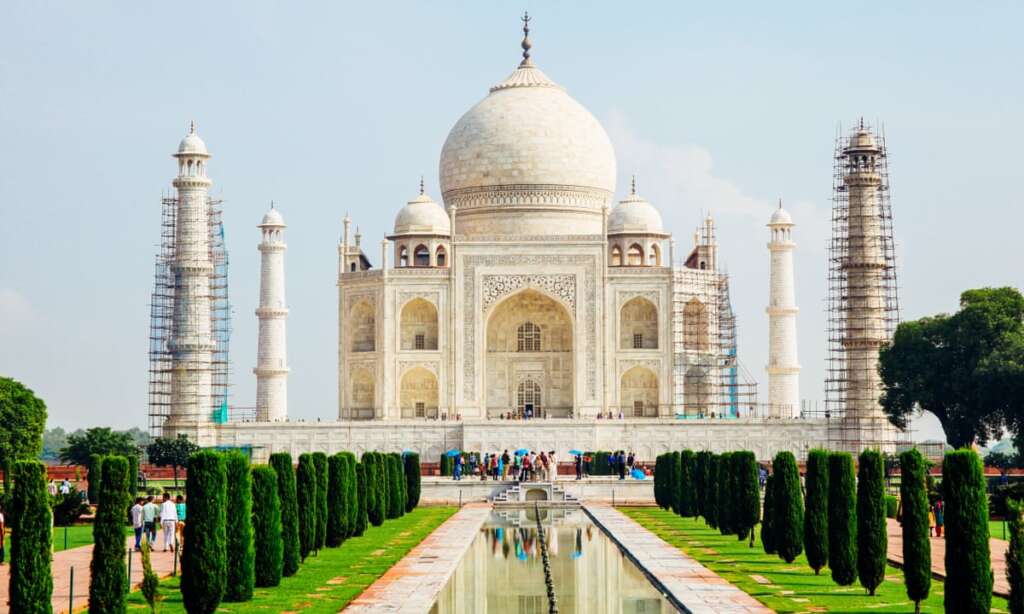 Known as the “Crown of Palaces” the Taj Mahal is said to be the jewel of Islamic art in a nation dominated by the Hindu religion. Influenced by Indian, Persian, and Islamic architectural designs, the mausoleum complex is made up of white marble, which changes its color according to the time of the day.

So how much can you do for love? The fifth Mughal emperor, Shah Jahan built the Taj Mahal as a testament to his undying love for the late wife Mumtaz Mahal. Very sentimental, right?

Did you know that the Taj Mahal attracts over one million tourists every year? Or, that the materials used to build the site were transported to the construction by 1,000 elephants?

To make a striking view, the mausoleum’s minarets are build leaning slightly outwards to create an optical illusion, thus making it appear larger from the outside.

The rising levels of pollution can cause yellowing of Taj Mahal’s marbles, to counteract this yellowing a special mud-pack treatment is used. It helps to also restore the natural sheen and color of the mausoleum. 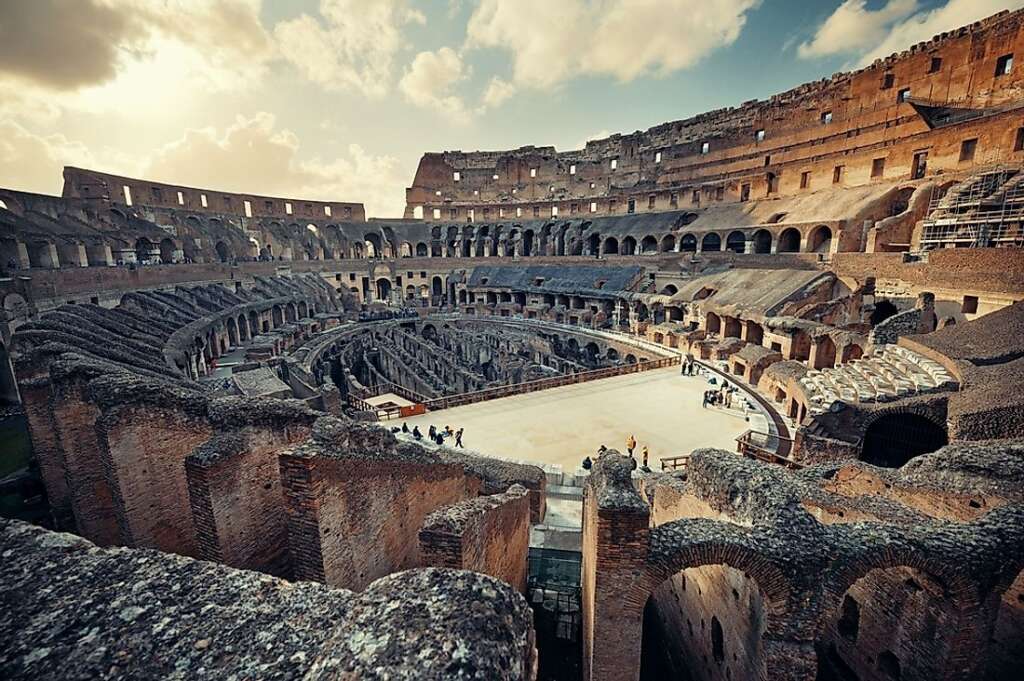 The Colosseum is the largest amphitheater in the world and could seat up to 50,000 spectators for different events. To gain popularity, emperors could pay for events and allow the public to attend for free. Sometimes there was free food. During the Roman times, the Colosseum had a special type of awning known as “veralium” which pulled the seating area to shade spectators from the scorching sun.

When in a guided tour of the Colosseum, you will get to see a section of the arena that was once underground and even enjoy walking on the cobblestone paved roads. Visiting the place feels like flipping back the pages of history. Once you set your eyes on the Colosseum, you’ll get curious at how old the monument is. It is 1900 years old.

The Great Pyramid of Giza (Egypt)

Do you ever think and wonder how the great pyramid of Giza came to be? Apparently, they are all man-made. It’s the oldest of all the seven wonders of the world. About 2.3 million stone blocks were used to build the pyramid.

You can visit the iconic site at night, to witness illuminating lights looming in the pyramids and the great sphinx, while hearing stories of Egyptian rulers from tour guides.

It is the only ancient wonder to have survived modernity. 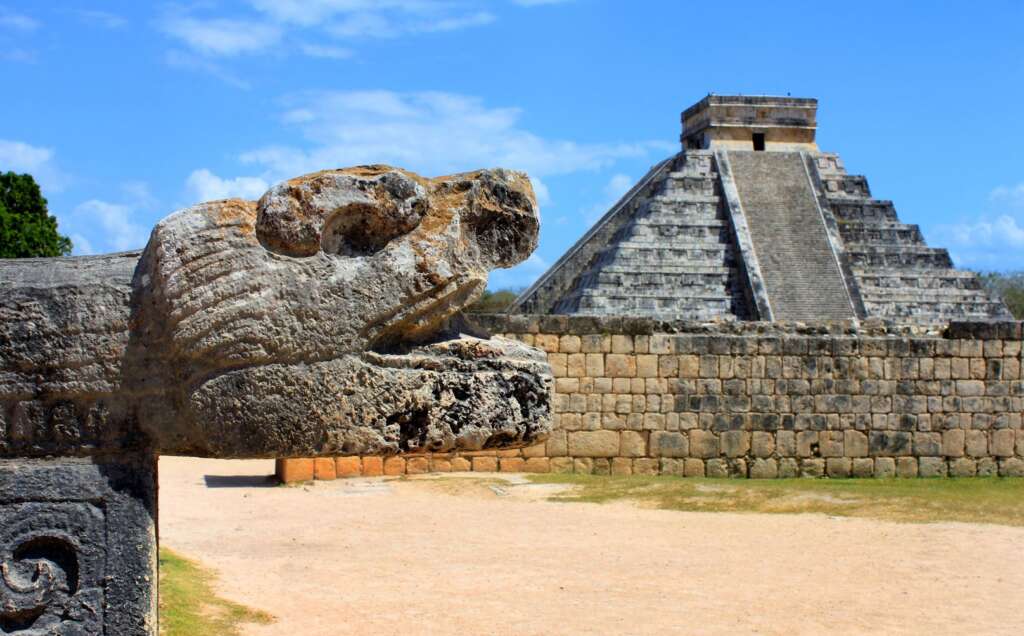 Classified as one of the new seven wonders of the world, Chichén Itza means “the mouth at the well of Itza”. The site is home to the remnants of many Mayan structures. The Mayans built the site at this location for logistical reasons, the site was close to the sacred cenote that supplied the city with fresh water.

Research shows that the Toltec’s invaded Chichén Itza in the 10th century, hence the most recognizable structure, the temple of Kukulkan was built and shows a strong Mexican influence.

Are you an ardent follower of astronomy and horoscopes? Well, if you are, it will be awestruck to learn that the Mayans were believers of astronomy, hence why the building of the monument is astronomically aligned.

The sites are known for their unusual sounds, if you clap once from one end of the ball court it produces nine sounds from the middle of the court. Do not fret when you realize that clapping once in the front of Kukulkan pyramid, the sound resembles the echo of a serpent’s chirp. 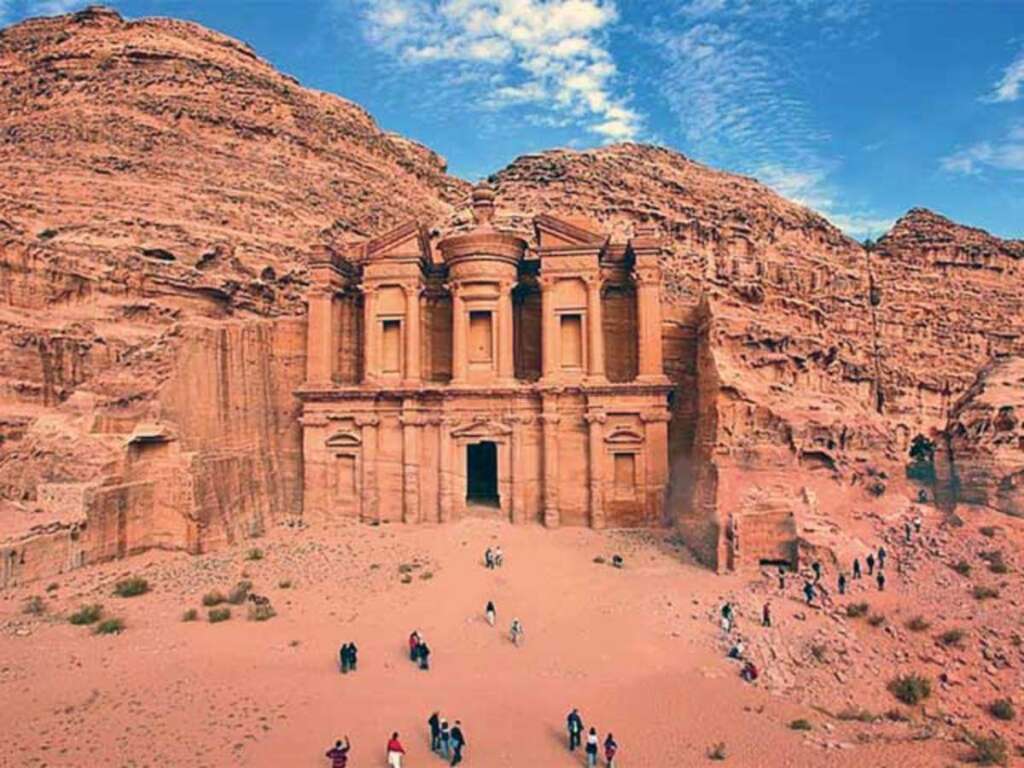 Discovered by a Swiss explorer, Johann Ludwig, Petra is Jordan’s most visited tourist attraction site and is also known as the Rose City due to the stone’s color. It’s actually a place that you’ll need to visit, to believe its existence.

You might have watched the geographical site on screens and assumed the famous treasury is designated to separate the righteous from the wicked. Sorry to debunk your assumptions, the truth is that the treasury facade is a graveyard and most importantly a gem.

The site is located near a famous biblical location, apparently, it derives its water in the exact place Moses drew water from. In as far as the architects of Petra were non-Christians, the City’s proximity to the Valley of Moses makes it an intriguing pilgrimage site for Christian visitors.

Before visiting the place, do note that Petra is sweltering during summer, so it is advisable to visit during the late spring or in the early autumn seasons.

That’s all we got for the seven wonders of the world, now you have them at your fingertips and be sure to gauge what you’ve learned from this detailed piece by sharing information with peers.