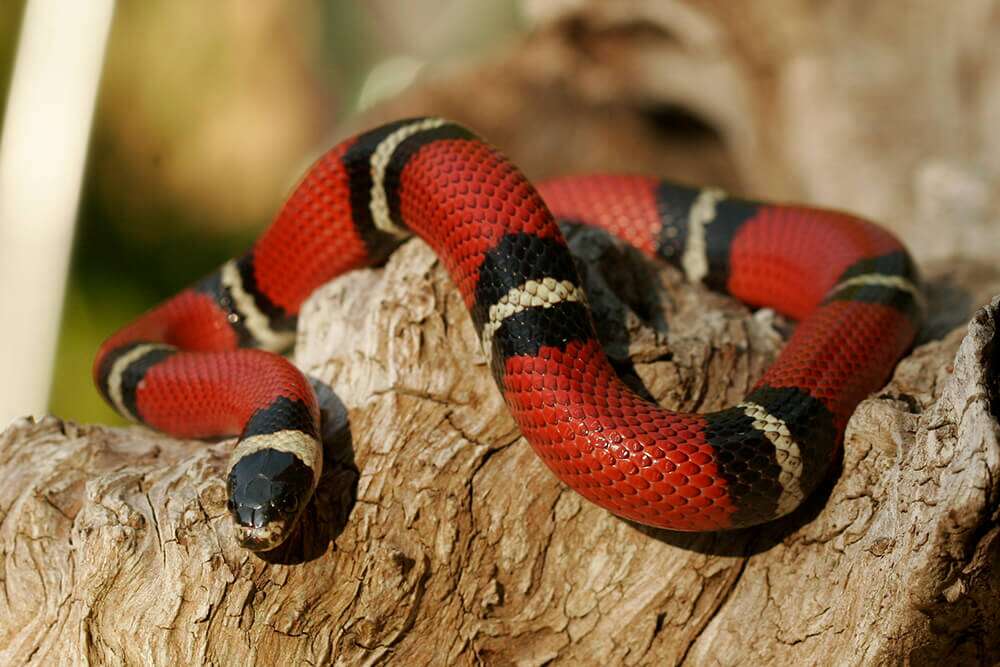 The California kingsnake is a relatively medium-sized serpent adorned with contrasting, striking bands or stripes along its body. These types of snakes can be spotted in Oregon, California, Nevada, Utah, Arizona, and northwestern Mexico.

This snake species is distinctly famous for its uniform red, blackish, and white patterned bands. The red bands are usually surrounded by two black bands.

The snake’s biological features consist of a smooth dorsal scale that is glossy and feels like an enamel texture. They also have hinged jaws, allowing them to swallow prey more considerably than the size of their head. 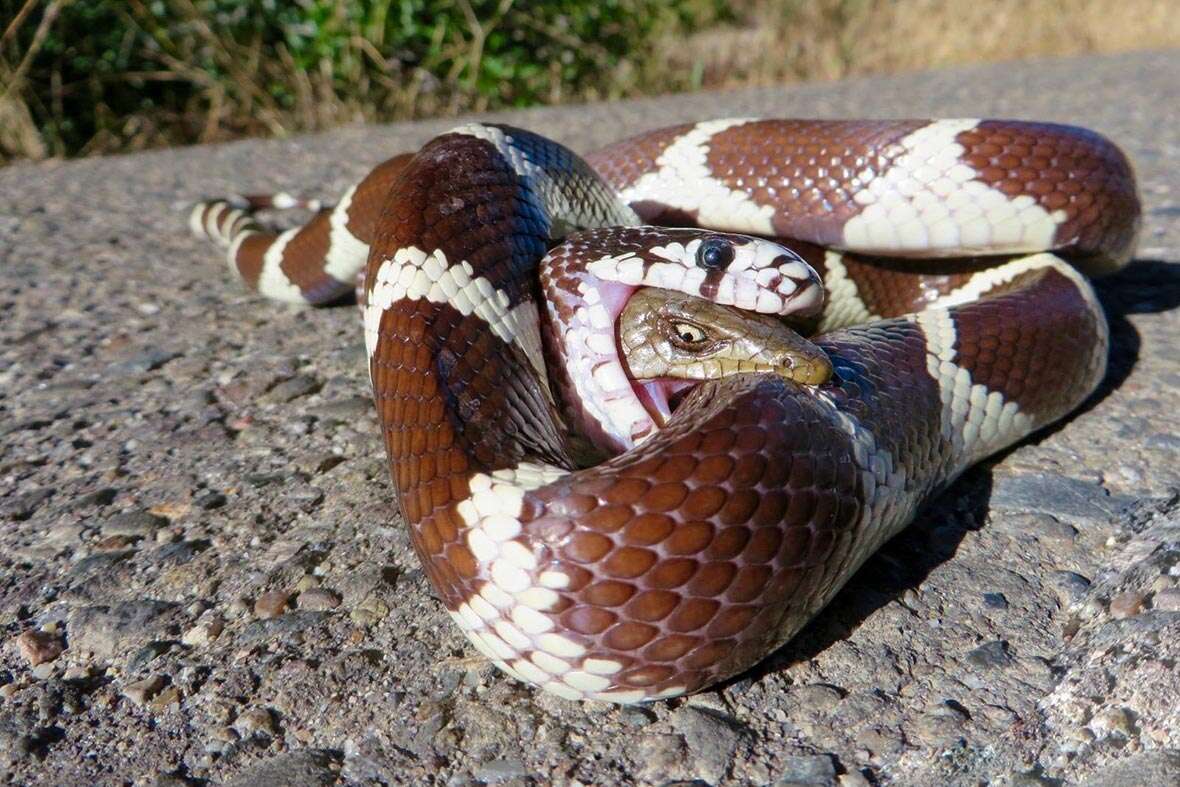 California kingsnake has multiple subspecies and morphs. The pattern predominantly alternates dark and light bands. The dark bands can be black or brown, while the light shades are cream and white.

Despite the albino ‘high white’ morphs being rare, they are a prevalent and expensive breed common in the pet trade. The exclusive albino morphs come in various pastel shades like banana yellow and lavender.

Read on to discover interesting facts about this scaly friend.

The California kingsnake is a non-venomous snake but appears eerily similar to the venomous coral snakes. When the nonvenomous California kingsnake feels threatened or irritated, it might bite. They will even coil their body into a ball, and hide their head inside if disturbed.

Primarily, this snake is a constrictor, meaning it kills its prey by squeezing them to death before eating. Despite being a full-grown snake, the California kingsnake does not prey on humans. Its body is also mostly immune to the venom of venomous snakes like rattlesnake species.

California Kingsnake is outstanding in the regard to fancying a solitary life. This serpent is only social during the breeding season (in the spring). Did you know baby California kingsnake lives independently from the first day of hatching? Once the female California kingsnake lays eggs, they abandon them and let them hatch by themselves.

California Kingsnake is continuously growing throughout their life; hence, they never stop shedding their skin like lizards. Usually, the shedding takes place after feeding. You will notice the opaque, dull color of your California kingsnake as well as the cloudy blue eyes.

For those in captivity, you can ease the shedding process by laying a damp towel and letting your California kingsnake slither through it. The wetness lubricates the scaly skin and allows the scale to fall out in the whole piece.

California kingsnake usually goes deep underground and enters brumation during the winter. This hibernation-like state is characterized by reduced activities and slowed metabolism.

California kingsnake is diurnal in nature. They are primarily active during the day in colder climates but will become more crepuscular and nocturnal in high weather conditions where they will hunt at night.

The California kingsnake is a deemed majestic serpent with a charm of its own. The cannibalistic species gets its ‘king’ name from its resistant nature to the rattlesnake venom, even though it is not entirely immune to it.

The appealing scaly friend is a non-venomous docile serpent that is naturally harmless to humans. Compared to their body size, these snakes are potent constrictors with high-power muscle.

In the wilderness, the California kingsnake is famous as a skillful predator. They patiently wait for their prey while camouflaging themselves in their environment.