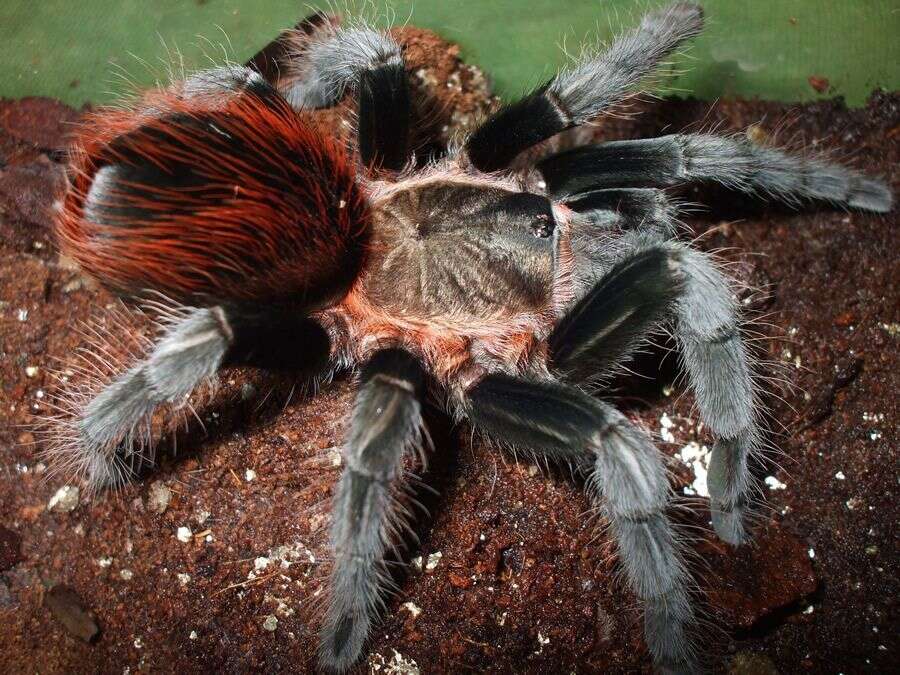 The red rump tarantula is a beautiful velvet black spider with vibrant red hairs on its abdomen and legs. This species has a stocky body and fangs that disseminate venom, just like the Caribena Versicolor spider. This night predator is famous for the red hair adorning its abdomen and legs. Unlike in other animals where the male outgrows the female, the case for Red Rump Tarantulas is vice versa.

Below are the top 5 astonishing facts about this phenomenal spider.

This species goes through the molting process, where they shed their exoskeleton to provide space for a new one to grow. The process involves the spider breaking its previous exoskeleton, splitting it, and wriggling out.

Shedding the older and smaller exoskeleton ensures they keep growing in size over their lifespan. The spiderlings undergo molting biweekly, at least for the first four months.

Sexual dimorphism is present in Red Rump Tarantulas from colorization to their lifespan. The color is replicated across males and females. The only difference is that the males are brighter, while the females appear more prominent due to their large size.

The young spiderlings have a brown color. The female red Rump lives longer, with a lifespan that stretches up to 30 years. Unfortunately, the male is short-lived and famous for dying after attaining maturity. Surprisingly, the females molest and feed on their male counterparts, especially after mating.

Red rump tarantulas are calm and docile until when provoked or threatened. They use their urticating red hair as a defensive mechanism to trap and bind their prey. Aside from their flicking mechanism, they also use venom to break their prey down, making it easy for them to digest.

Red rump tarantulas are venomous. However, the amount of venom in their bite is not enough to pose major harm unless one is allergic to them. If this hair gets in contact with your skin, you will feel like bits of fiberglass. Medical attention is only needed if Red rump tarantula gets into mucus membranes, especially in the eyes.

Red Rump Tarantulas is a nocturnal predator that hunts during the night and rests during the day. This predator of the night is primarily a carnivore. They fancy feeding on insects, small rodents, lizards, locusts, and crickets.

They will feed on any creature they can overpower, including small vertebrates like mice. Feeding once is usually enough to satiate Red Rump Tarantula for a week, after which they hunt again.

Red Rump Tarantula communicates via seismic communication, whereby they thump up the ground to rely on their intentions toward each other. This kind of communication is common during the mating season, which commonly happens in late summer and early fall, when the male attempts to court the female.

When they sense danger, these spiders raise their forelegs to intimidate and scare away the attacker. In the event of an attack, this spider shoots its urticating hairs, making them a handy tool for defense and hunting.

Their striking process mirrors the defense mechanism of porcupines shooting quills from its body.

The Red rump tarantula is an eye-catching spider, popular for its striking coloration and docile temperament. The vivid red hairs on their abdomen and legs are equipped enough to detect taste and vibration.

Unlike other spiders that build webs on the ground, Red Rump Tarantulas are fossorial species that dig burrows into the ground. They are venomous spiders that are docile and will only attack when provoked. Generally, they are not very harmful to humans.